MV Ever Given, the giant container ship that blocked the Suez Canal for almost a week, has been fully floated and is slowly on the move.

The Suez Canal Authority said that traffic has resumed on the vital waterway and shipping route between Asia and Europe.

"Admiral Osama Rabie, head of the Suez Canal Authority, has announced the resumption of shipping traffic in the Suez Canal," the SCA said in a statement.

"She's free," an official involved in the salvage operation said.

The 400-metre-long ship became embedded in the bank of the canal last Tuesday after it was blown off course by a strong gust of wind.

The shipping company that runs the vessel said it would be moved north to the Great Bitter Lake for an inspection of its seaworthiness.

Taiwan-listed Evergreen, which is leasing the ship, said decisions regarding the vessel's cargo would be made after the inspection.

It said that it would coordinate with the ship's owner after investigation reports were completed.

The vessel had sailed from Yantian in China and was heading to Rotterdam in The Netherlands.

More than 300 ships are currently waiting to travel through the canal, with many more rerouted around southern Africa, adding up to two weeks to journeys and increasing fuel costs.

About 15% of world shipping traffic transits the Suez Canal, which is a key source of foreign currency revenue for Egypt. The stoppage cost the canal €12m to €13m a day.

The Ever Given cargo ship which was blocking the Suez Canal for almost a week is fully floated and traffic is to resume, the canal authority has said.

Read more
Suez Canal issues 'should have been foreseen' - expert

After dredging and excavation work over the weekend, rescue workers from the SCA and a team from Dutch firm Smit Salvage succeeded in partially refloating the vessel early this morning using more than a dozen tug boats.

Efforts to completely free her continued throughout the day.

Mr Rabie told Nile TV: "The ship came out intact and it has no problems.

"We've just searched the bottom and soil of the Suez Canal and thankfully it is sound and has no issues, and ships will pass through it today."

Smit Salvage said approximately 30,000 cubic metres of sand had to be dredged to refloat the 224,000-ton container ship.

Bernhard Schulte Shipmanagement, the technical managers of the container ship, said there were no reports of pollution or cargo damage. 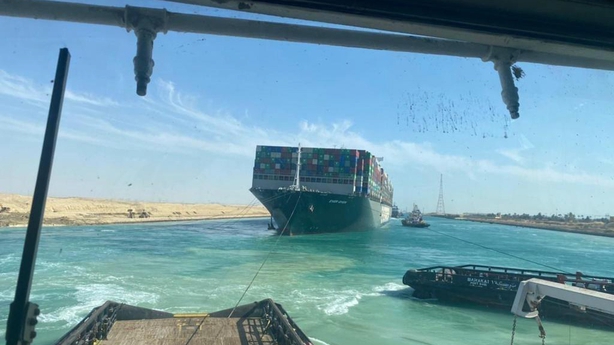 World oil prices eased this afternoon as traffic resumed on the canal, although it could take from two-and-a-half to three days to clear the backlog.

A canal source said more than 100 ships would be able to enter the channel daily.

A marine source told Reuters that vessels are travelling southwards this evening towards the Red Sea.

Egypt's Leth Agencies said 43 vessels had resumed transit from the Great Bitter Lake, which separates two sections of the canal.

Egyptian President Abdel Fattah al-Sisi, who had not publicly commented on the blockage, said Egypt had ended the crisis and assured resumption of trade through the canal. 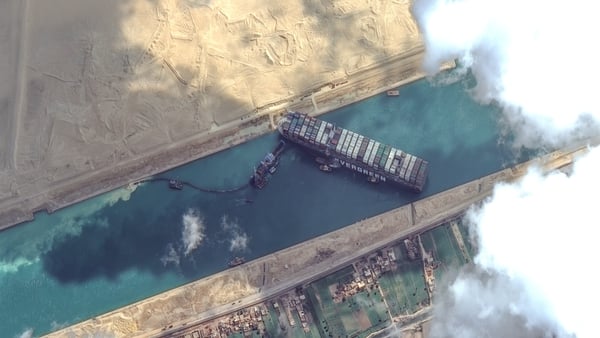