It is the second record for daily deaths set this week as the virus continues to devastate Latin America's largest country.

Brazil surpassed 100,000 new Covid-19 cases in one day yesterday, adding another grim record in a country where the pandemic has killed more than 300,000 people.

With the new cases, at least 12.3 million people are now known to have been infected with the coronavirus in Brazil. After the United States, it is the hardest-hit country anywhere in the world.

The toll has risen steadily since February, due to factors including people's abandoning of social distancing norms, and a new virus variant that emerged there, which is believed to be more contagious than the original strain.

Another big problem is that the country's vaccination drive is moving slowly.

The average of new daily infections over the past seven days is 77,050 - twice what it was in January.

On Tuesday, the daily death toll surpassed 3,000 for the first time. Brazil's daily number of fatalities is now the highest in the world.

President Jair Bolsonaro announced on Wednesday he was launching a crisis committee to deal with the pandemic, a change of course amid mounting pressure over a situation he has repeatedly minimised. 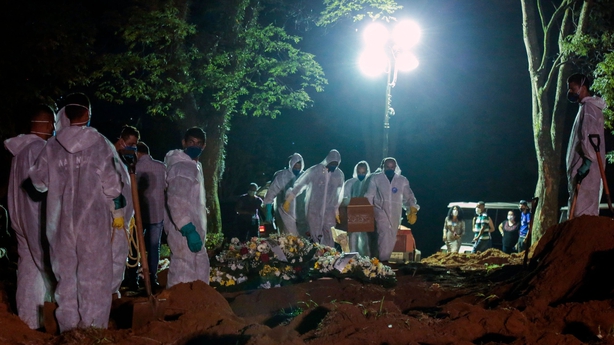 The announcements appeared to do little to tame criticism of Mr Bolsonaro, who has flouted expert advice on lockdowns and face masks, pushed a drug regimen he calls the "early treatment" package that scientists say does not work, and spoken out against vaccines.

The newspaper Folha de Sao Paulo accused the president of lying when he said his government had worked ceaselessly to fight the virus.

"For 12 months, Bolsonaro minimised the pandemic, promoted crowds, spoke out against mask use and halted talks to secure vaccines," it said.

One of Mr Bolsonaro predecessors Luiz Inacio Lula da Silva said the death toll amount to the "biggest genocide" in the country's history.

Meanwhile, Mexico has become the world's third country to surpass 200,000 coronavirus deaths, as fears grew of another wave of infections after Easter.

The nation's Covid-19 fatality toll now stands at 200,211, the health ministry said in its daily update.

The bleak milestone comes despite a decline in new cases and deaths in recent weeks, following a surge in January that pushed many hospitals to the breaking point.

The country's coronavirus czar, Hugo Lopez-Gatell, has warned of the risk of a new wave of infections as millions of Mexicans prepare for the Easter holidays around the start of April.

That prospect also worries epidemiologist Alejandro Macias, although he thinks that it is possible that Mexico has now gained some degree of immunity.

"The world is in a third wave. Perhaps few countries had it as intensely as Mexico in the second, so the virus would have fewer people to infect," he told AFP.

Mexico's death toll is far worse than the government's "catastrophic" scenario of 60,000 deaths.

"I imagined it was going to be worse than they were assuming," said Mr Macias, who led the country's fight against the swine flu pandemic in 2009.

"But it was much more lethal," he said.

Excess mortality data suggests the real Covid-19 death toll is much higher than the official figure, due to limited testing.

President Andres Manuel Lopez Obrador, who has himself recovered from the virus, was accused of being slow to impose a lockdown and has worn a mask only on rare occasions.

The left-wing populist, who continues to enjoy high public approval ratings, points out that the Mexican government was one of the first in Latin America to start vaccinations, on 24 December.

But Mexico desperately needs more vaccines. So far roughly 6.1 million doses have been applied in the country of 126 million people.

"For there to be a true mass vaccination, we need to have ten million vaccinations a month," Mr Macias said.

Australia has reported its first locally acquired coronavirus case in more than a week after a 26-year-old man tested positive, prompting authorities to place restrictions on hospitals, retirement homes and disability centres.

The person who contracted the virus has been infectious for a week but stayed mostly isolated at home since Monday after developing symptoms, Queensland state Premier Annastacia Palaszczuk said.

Visitors will be banned in hospitals and retirement homes in state capital Brisbane from today, as authorities urged the city's residents to wear masks indoors and when using public transport.

"I hope we don't need to have more restrictions, but it just depends what unfolds over the next 24, 48 hours," state Chief Health Officer Jeannette Young told reporters.

Health alerts have been issued for shopping centres, an Italian restaurant and supermarkets exposed to the virus as officials rushed to trace the source of the infection.

It has reported just over 29,200 cases and 909 deaths since the pandemic began.