The United Nations special envoy on Myanmar has demanded an end to the military's "repression" of protesters, appealing to the Security Council to act on the "desperate pleas" from the country.

"Your unity is needed more than ever on Myanmar," Christine Schraner Burgener told a meeting of the council on the crisis. "The repression must stop."

She said that she is receiving some 2,000 messages a day from Myanmar urging international action.

"The hope they have placed in the United Nations and its membership is waning and I have heard directly the desperate pleas - from mothers, students and the elderly," she said.

"Allow me to reiterate: the international community should not lend legitimacy or recognition to this - a regime that has been forcefully imposed."

But Ms Burgener stopped short of urging international sanctions on the military junta, which overthrew civilian leader Aung San Suu Kyi on 1 February and has killed more than 50 people as it tries to crush persistent protests.

The army has historically counted on support from veto-wielding Security Council member China, which has voiced misgivings about the coup but not joined Western nations in sanctions.

Diplomats said that no statement was expected to come out of today's session initiated by the UK but that Security Council members would pursue work on a text.

Ms Burgener called for world powers to be "robust and timely" in pushing for the restoration of democracy.

"We must denounce the actions by the military, which continues to severely undermine the principles of this organization and ignores our clear signals to uphold them," she said.

Her appeal came as another protester was shot dead in Myanmar today.

Despite the increasingly brutal crackdown by the military authorities, protesters took to the streets again in towns across the country to denounce the coup.

The violence has brought condemnation from around the world, with the UN Human Rights Commissioner Michelle Bachelet demanding the junta "stop murdering and jailing protesters".

But despite the mounting international pressure, the generals have shown no sign of heeding calls for restraint. 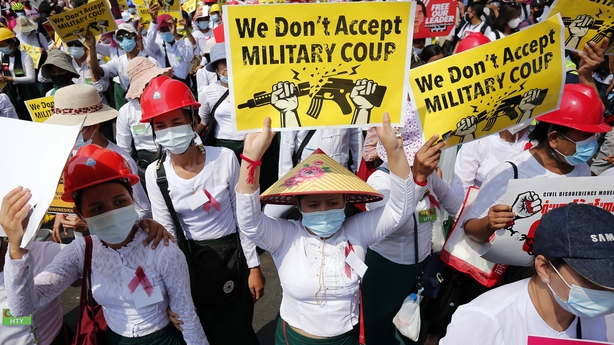 In Mandalay, Myanmar's second largest city, hundreds of engineers took to the streets crying "Free our leader" in reference to ousted Ms Suu Kyi, detained by the military since the first night of the coup.

A 26-year-old man helping at barriers set up in the city to slow security forces died after being shot in the neck, medical officials said.

The killing followed the deadliest day of the crackdown on Wednesday, when the UN said at least 38 people were killed.

In the southern city of Dawei police fired tear gas at demonstrators, while there was defiance despite the danger at protests in the commercial capital Yangon.

"Scared, yeah I'm very scared to stay on the frontline. But we believe in our comrades and we promise to protect each other if someone is injured," Didi, a 27-year-old protester said.

Meanwhile in the country's north, a number of people have crossed the border into India in a bid to escape the crackdown.

Indian police said nine people had crossed the 1,600-kilometre frontier - three of whom were police officers who had refused to take part in putting down protests.

The junta has sought to stop news of the crackdown getting out, cutting off the internet and banning Facebook, the most popular social media platform in the country.

But live video feeds and recorded footage are leaking out daily, and today the junta suffered its own internet ban as YouTube shut off a number of military-run channels.

Many parts of the country were hit by power cuts for several hours, though it was not clear that this was a deliberate measure in a country where infrastructure is sometimes unreliable.

Government agencies attributed the outage to a "system breakdown". 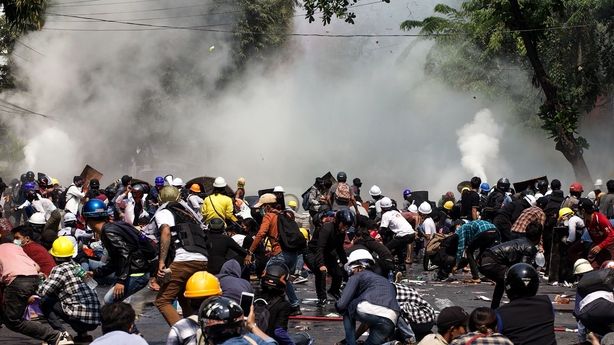 Last month's coup brought a crashing halt to a decade-long experiment with democracy in Myanmar, which was previously under military rule for nearly five decades.

The country's generals have historically had few doubts about brutally suppressing dissent, crushing major protest movements in 1988 and 2007.

As in the past, the international community has in the last few weeks sought to persuade and shame the junta into moderation, slapping on sanctions and calling out abuses.

The United States has tightened export controls on Myanmar, putting the country in the same category as Russia and China, and limited the transfer of any equipment with military uses.

The United Nations Special Rapporteur on the rights situation in Myanmar, Thomas Andrews, called for a "global arms embargo" on the country as well as an International Criminal Court probe into alleged atrocities.

In New York, there was a fresh twist in the saga of Myanmar's representative to the UN.

The newly appointed ambassador resigned, saying his predecessor - sacked by the junta after condemning the seizure of power in a speech to the General Assembly - was still the legitimate envoy.

Ms Suu Kyi's National League for Democracy won November elections by a landslide, but the military insisted the polls were rigged as a justification for seizing power.