The UN rights office has said it had credible information that at least 18 people have been killed in a crackdown on protesters in Myanmar as it strongly condemned the violence.

Myanmar security forces opened fire on protesters, killing at least eight, according to AFP sources in the country including rescue workers, in the bloodiest action so far to smother opposition to the military coup four weeks ago.

"We strongly condemn the escalating violence against protests in Myanmar and call on the military to immediately halt the use of force against peaceful protesters," Ravina Shamdasani, spokeswoman for the UN Office of the High Commissioner for Human Rights, said in a statement.

Ms Shamdasani said: "Throughout the day, in several locations throughout the country, police and military forces have confronted peaceful demonstrations, using lethal force and less-than-lethal force that - according to credible information received by the UN Human Rights Office - has left at least 18 people dead and over 30 wounded. 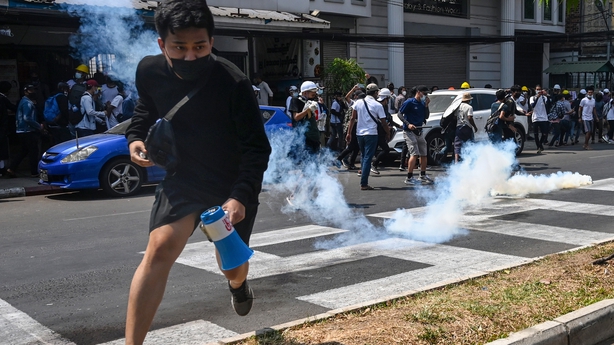 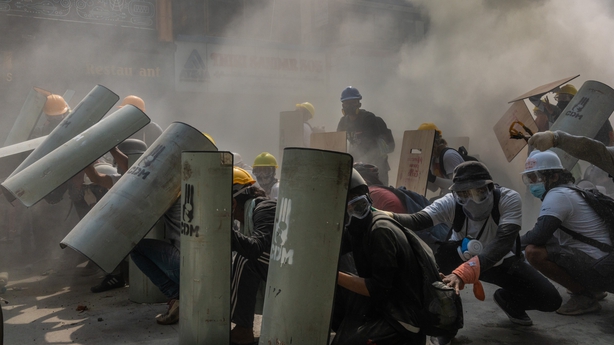 "Deaths reportedly occurred as a result of live ammunition fired into crowds in Yangon, Dawei, Mandalay, Myeik, Bago and Pokokku. Tear gas was also reportedly used in various locations as well as flash-bang and stun grenades."

AFP could not independently confirm the UN toll.

Myanmar's junta is battling to contain a massive street movement demanding it yield power and release ousted civilian leader Aung San Suu Kyi, who was detained along with top political allies at the start of the month.

Ms Shamdasani said the use of lethal force against non-violent demonstrators was never justifiable under international human rights norms.

She said: "The people of Myanmar have the right to assemble peacefully and demand the restoration of democracy.

"These fundamental rights must be respected by the military and police, not met with violent and bloody repression."

The office of UN human rights chief Michelle Bachelet also reiterated a call for the immediate release of all those arbitrarily detained, including members of the elected government.

"Today alone, police have detained at least 85 medical professionals and students, as well as seven journalists, who were present at the demonstrations.

"Over 1,000 individuals have been arbitrarily arrested and detained in the last month - some of whom remain unaccounted for - mostly without any form of due process, simply for exercising their human rights to freedom of opinion, expression and peaceful assembly.

"The international community must stand in solidarity with the protesters and all those seeking a return to democracy in Myanmar." 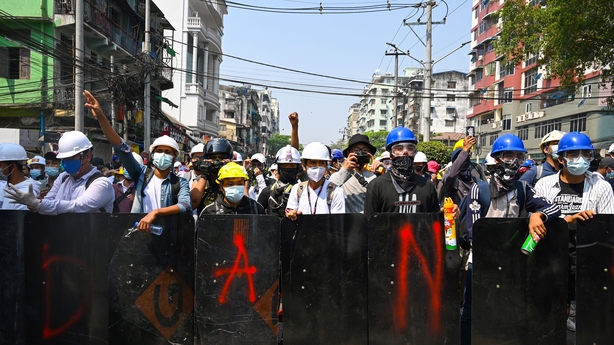 Three men were killed and at least 20 others injured when security forces moved on a rally in the southern coastal hub of Dawei.

Rescue worker Pyae Zaw Hein said the trio were "shot dead with live rounds", while the injured were hit by rubber bullets.

Two teenagers were gunned down in Bago, a two-hour drive north of commercial capital Yangon.

Ambulance driver Than Lwin Oo told AFP he had sent the bodies of the 18-year-olds to the mortuary at Bago's main hospital. 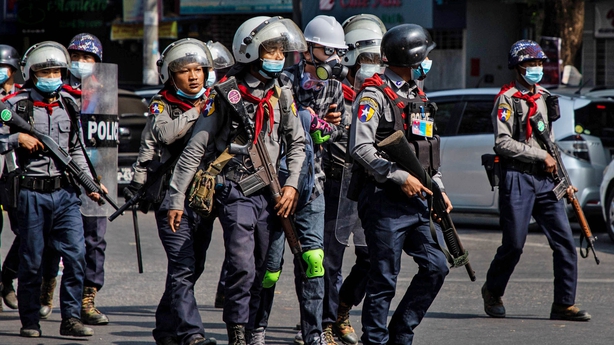 Officers in Yangon began dispersing small crowds minutes before the slated beginning of the day's protest, with a 23-year-old man shot dead in the city's east.

In Mandalay, an emergency doctor told AFP that two men had died from gunshot wounds.

Elsewhere protesters took up positions behind barricades and wielded homemade shields to defend themselves against the onslaught, with police using tear gas to clear some rallies.

Hundreds of people had been arrested by evening and transported to the city's notorious Insein Prison, where many of Myanmar's leading democracy campaigners have served long jail terms under previous dictatorships.

At least one journalist documenting today's assaults by security forces was beaten and detained further north in Myitkyina, a city at the headwaters of the Irrawaddy river, according to local outlet The 74 Media.

Another reporter was shot with rubber bullets while covering a protest in the central city of Pyay, their employer said.

A spokesman for the ruling junta did not respond to phone calls seeking comment on today's violence.

Before today, at least five people had died in anti-coup unrest since the army takeover, including three killed on 20 February.

One police officer also died while attempting to quell a protest, the military has said. 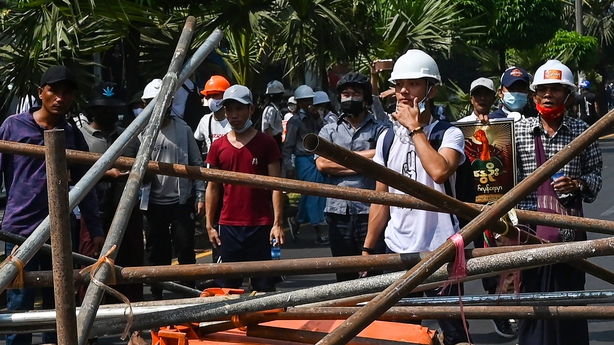 Myanmar has been roiled by giant demonstrations and a civil disobedience campaign encouraging civil servants to walk off the job since the 1 February military takeover.

Today's crackdown followed a similar wave of violent action against angry but largely peaceful anti-coup rallies around the country a day earlier.

More than 850 people have been arrested, charged or sentenced since the coup, according to the Assistance Association for Political Prisoners monitoring group.

But the weekend crackdown was expected to raise that number dramatically, with state newspapers reporting 479 arrests yesterday alone.

International condemnation of the military regime has been fierce, with the United States, European Union and others denouncing violence against protesters.

"We are heartbroken to see the loss of so many lives in Myanmar. People should not face violence for expressing dissent against the military coup. Targeting of civilians is abhorrent," the US Embassy in Yangon tweeted.

Suu Kyi has not been seen in public since she was taken into custody during pre-dawn raids in the capital Naypyidaw.

A court hearing will be held tomorrow for the ousted leader, who faces obscure charges for possession of unregistered walkie-talkies and violating coronavirus restrictions on public gatherings.

But her lawyer Khin Maung Zaw told AFP he had still been unable to meet with Ms Suu Kyi ahead of the hearing.

"As a lawyer, I put my trust in the court," he said. "But in this period of time anything can happen."

State media announced yesterday that the junta had sacked the country's United Nations envoy, who gave an impassioned plea for help on behalf of Myanmar's ousted civilian government.