NASA has released stunning new photographs from Perseverance, including one of the rover being gently lowered to the surface of Mars by a set of cables, the first time such a view has been captured.

The high-resolution still was extracted from a video taken by the descent stage of the spacecraft that had transported the rover from Earth.

At that moment, the descent stage was using its six-engined jetpack to slow to a speed of about 2.7kmph as part of the "skycrane maneuver", the final phase of landing. 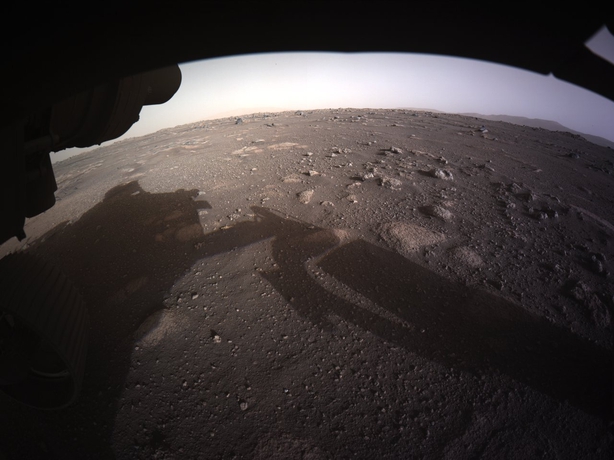 "You can see the dust kicked up by the rover's engines," said Adam Steltzner, Perseverance's chief engineer, who estimated the shot was taken about two metres or so above the ground.

The three straight lines are mechanical bridles holding the rover underneath the descent stage, while the curly cable was used to transmit the data from the cameras to Perseverance.

When the rover touched down, it cut the 21 foot-long cables, allowing the descent stage to fly away for its own safe landing.

Another new image, taken by the Mars Reconnaissance Orbiter, captures Perseverance as it was parachuting down through the atmosphere at hundreds of miles an hour.

Perseverance has also been able to upload its first high-resolution, colour photo showing the flat region it landed on in the Jezero Crater, where a river and deep lake existed billions of years ago. 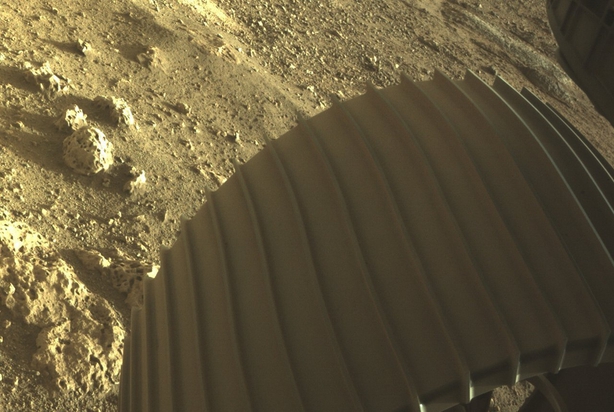 A second colour image shows one of the rover's six wheels, with several honeycombed rocks thought to be more than 3.6 billion years old lying next to it.

"One of the questions we'll ask first is whether these rocks represent a volcanic or sedimentary origin," said NASA deputy project scientist Katie Stack Morgan.

Volcanic rocks in particular can be dated with very high precision once the samples are brought back to Earth on a future return mission - an exciting development from a planetary science perspective.

As the first images came in, "it was exhilarating, the team went wild," said mission operations system manager Pauline Hwang.

"The science team immediately started looking at all those rocks and zooming in and going, 'What is that!' - it couldn't have been better."

The first two images were released yesterday shortly after the rover landed, but they were lower resolution and in black-and-white because of the limited data rate available.

NASA hopes to have more high resolution photos and videos in the coming days, but doesn't know yet if it has successfully recorded sound on Mars for the first time using microphones.

That might be known later this weekend or early next week, said Steltzner.

Every picture tells a story. This one captures me in midair, floating over Mars while hanging from my parachute during the final #CountdownToMars.