"This is a horrific tragedy," Amnesty said in a statement, citing witnesses as blaming local rulers, the Tigray People's Liberation Front (TPLF), for the killings, which it said took place two days ago.

Earlier, Ethiopian Prime Minister Abiy Ahmed had accused his enemies of committing atrocities during a week of fighting that threatened to destabilise the Horn of Africa.

Mr Abiy said the Ethiopia military had defeated local forces in the west of the state.

With communications down and media barred, independent verification of the status of the conflict is impossible.

Amnesty said in its report that the killings had taken place in the town of Mai Kadra in Tigray's southwest, and that witnesses described bodies with wounds that appeared to have been inflicted with knives or machetes.

There was no immediate response from the Ethiopian government or Tigray's local leaders.

There are fears the conflict may suck in neighbouring Eritrea, whose government signed a peace pact with Mr Abiy two years ago but remains hostile to the Tigrayan leadership. It may also weaken Ethiopia's role in an African Union force opposing Islamist militants in Somalia.

Major conflict could also hinder foreign investment in Ethiopia's economy, which had clocked nearly double-digit annual growth for years before the coronavirus hit and is liberalising, with multinationals particularly eyeing the telecoms sector.

The TPLF, which rules the mountainous northern state of more than five million people, announced a state of emergency against what it termed an "invasion".

Mr Abiy accuses the TPLF of starting the conflict by attacking a federal military base and defying his authority, while the Tigrayans say they have been persecuted during his two-year rule.

"The western region of Tigray has been liberated," tweeted the prime minister, who comes from Ethiopia's largest ethnic group, the Oromo, and once fought with the Tigrayans against Eritrea.

He said some of his soldiers had been found dead in the town of Sheraro, shot with their legs and arms tied behind their back. "This kind of cruelty is heartbreaking," he added.

How Ethiopia reached the brink of civil war

Mr Abiy did not say how many bodies were found or provide proof. Reuters news agency could not verify his allegation and there was no immediate response from the TPLF, which has accused federal troops of being "merciless" in bombing Tigrayans.

More than 11,000 Ethiopian refugees have crossed into Sudan since fighting started and aid agencies say the situation in Tigray is becoming dire. Even before the conflict, 600,000 people there were reliant on food aid.

The United Nations refugee agency's representative in Ethiopia, Ann Encontre, said that negotiations were under way with both sides for humanitarian corridors.

A "major emergency" may be brewing with so many people escaping to Sudan, she warned. Half of the refugees were children and some were wounded.

After taking office in 2018, Mr Abiy was applauded for opening up a repressive political system, including freeing activists from jail and lifting bans on opposition political parties. He won his Nobel prize for the peace accord with Eritrea.

But his democratic transition was already waning even before the push on Tigray, experts say, including jailing a prominent opposition member and restricting media.

Mr Abiy has so far resisted calls by the UN, the African Union and others for a ceasefire and talks.

The army said transitional rule would be set up in parts of Tigray and urged local forces to surrender.

In a wider push against the TPLF, Ethiopia's parliament stripped 39 members, including Tigray regional president Debretsion Gebremichael, of immunity from prosecution.

Police said they had arrested 242 TPLF activists suspected of plotting attacks in the Ethiopian capital Addis Ababa. Weapons including bombs and bullets were also confiscated, the city's police chief said. 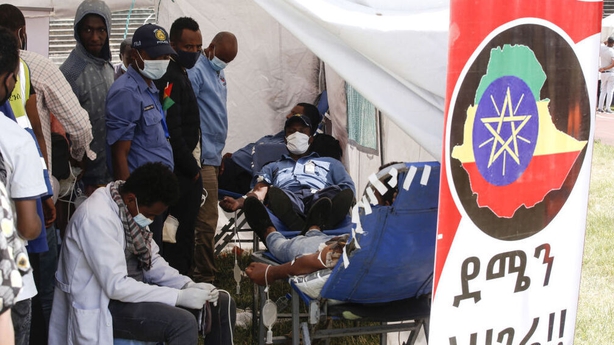 Also in the capital, volunteers lined up at a stadium to donate blood for injured armed forces members. Some waved the Ethiopian national flag.

Elsewhere, in what seemed to be a government-backed attempt to win the propaganda war over Tigray, thousands marched in anti-TPLF protests in the Oromia, Somali and Afar regions, state-affiliated Fana reported.