A police officer has described how he found the tightly packed, half-naked bodies of 39 people in the back of a lorry trailer in Essex last year.

PC Jack Emerson was among the first at the scene after lorry driver Maurice Robinson dialled 999 early on 23 October last year.

Mr Robinson, 26, had picked up the trailer from Purfleet docks after it was transported from Zeebrugge in Belgium, the Old Bailey has heard.

He opened the doors to the trailer minutes after leaving Purfleet but drove around and spoke to haulage boss Ronan Hughes and alleged organiser Gheorghe Nica by phone before alerting emergency services, jurors were told.

When police arrived on the scene at 1.50am, Mr Robinson was "just standing there" and appeared calm, according to PC Emerson.

The court was shown CCTV of marked police cars arriving in Eastern Avenue, Thurrock, where Mr Robinson's lorry was parked with the rear trailer door open. 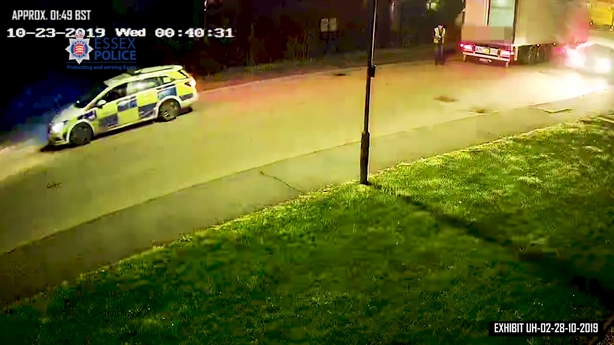 Describing the scene, PC Emerson said: "I could see one of the trailer doors was already open and I could visibly see numerous half-naked bodies in the back of the trailer, lying on the trailer floor motionless.

"I approached the door of the trailer to further inspect the bodies and it became apparent as I got closer that the entire trailer was full of bodies, and the individuals appeared to be half-naked.

"Most of them were wearing clothes on their lower half but they all appeared to not be wearing any clothing on their upper half.

"All of the bodies appeared intact and it was in my opinion that they had not been there for a very long period of time as there was not any visible sign of decomposure.

"There was however a strange smell coming from the trailer that smelt like chemicals.

"There was also smoke condensation coming from the rear of the trailer which suggested to me that the trailer was refrigerated."

The officer said in a statement read to court that the driver was arrested on suspicion of murder after a colleague called to "get him in cuffs".

Another officer radioed control saying there was "potentially 40 people deceased". 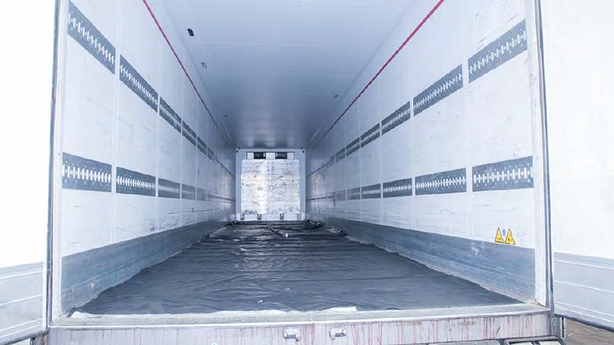 PC Emerson said he got inside the trailer to search for any signs of life, checking pulses and for breathing.

He said the bodies were "closely packed" together, mainly lying on their backs.

"I immediately started scanning the trailer to look for signs of life but there was not. All bodies appeared completely motionless.

"Due to how packed together the bodies were in the trailer it was not possible to check every body, so I made an attempt to check the bodies I could reach."

Jurors have heard that Robinson, 26, and Hughes, 41, have admitted manslaughter of the migrants.

Lorry driver Eamonn Harrison, 23, of Co Down, who dropped the trailer off at Zeebrugge, has denied 39 counts of manslaughter along with Nica, 43, of Basildon.

Harrison, another lorry driver Christopher Kennedy, 24, of Co Armagh, and Valentin Calota, 37, of Birmingham, have denied being part of a wider people-smuggling conspiracy, which Nica has admitted to.