French President Emmanuel Macron has announced a new lockdown aimed at halting an alarming acceleration of Covid-19 cases, to take effect from tommorrow night until "at least 1 December."

Bars, restaurants and non-essential businesses will be forced to close, but unlike during the two-month lockdown imposed last spring, students will continue to go to school, Mr Macron said during a televised address.

Factories and farms will also be allowed to operate and some public services will function, to limit the economic damage that would come from shutting down the country completely.

President Macron said: "The virus is being transmitted across France at a speed that even the most pessimistic did not predict.

"Like last spring, you will be able to leave your home only for work, for a doctor's visit, to help a relative, do essential shopping or go out shortly for air."

Written statements justifying being outside will be required, he said, suggesting that fines will again be issued for offenders.

He said: "If in two weeks, we have the situation under better control, we will be able to re-evaluate things and hopefully open some businesses, in particular for the Christmas holiday.

"I hope we'll be able to celebrate Christmas and the New Year with family."

Like other European countries, France has seen a surge in coronavirus cases that could soon overwhelm the country's hospitals.

More than 3,000 intensive care beds now hold Covid-19 patients, a number that Mr Macron said is poised to reach around 9,000 in November.

He said France would scramble to increase the number of available intensive care beds to 10,000, up from around 5,800 currently.

The new measures echo the eight-week lockdown that France enforced in the spring, when hospitalisations and deaths caused by the Covid-19 epidemic reached a peak.

The lockdown was effective at containing the epidemic, but it started spreading again after it was relaxed on 11 May, and people started congregating again in classrooms, universities, bars and restaurants.

Yesterday, France reported 523 new deaths from coronavirus over the previous 24 hours, the highest daily toll since April, when the virus was at its most severe.

France's death toll, at over 35,000, is the seventh highest in the world, according to Reuters data.

Earlier this month, Mr Macron announced a night-time curfew in Paris and other big cities, but officials this week acknowledged that measure had proved insufficient to bring down infection rates, requiring a more drastic response.

The head of Mr Macron's LREM party, Stanislas Guerini, appeared to be preparing the ground for a shutdown when he told France 2 television that the country needed "strong measures, powerful measures ... and probably at a national level".

By yesterday, there were 2,918 coronavirus patients in intensive care in France, more than half the overall capacity of 5,800 beds.

Nearly 19,000 were in hospital overall and France recorded over 33,400 new positive tests in 24 hours, as some hospitals were left with no choice but to start transferring patients to less-crowded facilities.

At the height of the epidemic, daily deaths sometimes exceeded 1,400.

At the time, France erected field hospitals and had to evacuate hundreds of patients from hospitals in hard-hit zones to less burdened areas, including some to Germany, Switzerland, Luxembourg and Austria. 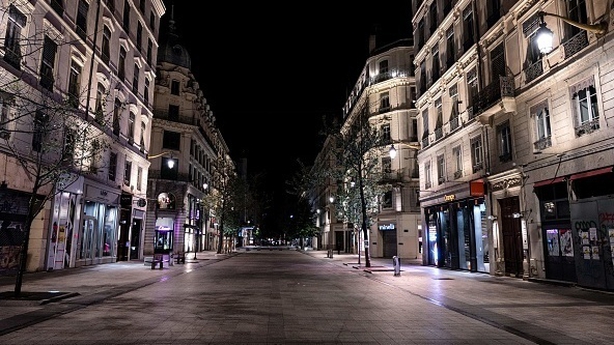