Tens of thousands of people in Poland have blocked city streets in cars, on bicycles and on foot on the fifth day of protests against a Constitutional Court ruling that amounts to a near-total ban on abortion in the country.

Carrying banners reading "Enough", "I won't be your martyr" and "I want choice, not terror", protesters gathered in several dozen towns and cities in defiance of coronavirus restrictions.

"I will be here until the end," said Piotr Wybanski, 31, standing in one of Warsaw's main thoroughfares.

"I don't care if it means a week, a month, three months or three years. I will protest here day after day."

The court ruling last Thursday fuelled an unprecedented backlash against the Roman Catholic Church in Poland, which is seen as having close links with the conservative nationalist Law and Justice (PiS) government.

It has also heightened criticism of PiS, which came to power five years ago on a promise to instill more traditional values. 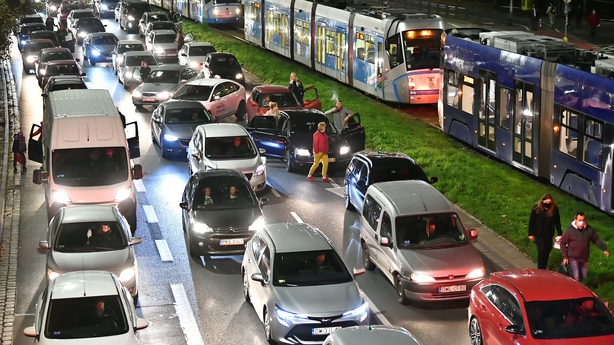 After the ruling goes into effect, abortion will be banned in the case of foetal abnormalities and will be legal only in the case of rape, incest or a threat to the woman's health.

Critics say the court has acted on behalf of the party, which has in the past stepped back from efforts to tighten abortion rules. PiS denies that.

The Constitutional Court is part of the government's sweeping overhaul of the justice system which the European Commission says subverts the rule of law by politicising courts.

Crowds also gathered again near the house of PiS leader Jaroslaw Kaczynski in an affluent Warsaw neighbourhood, as police in vans with flashing lights kept them away and a helicopter hovered overhead.

The government said military police would be called in to help enforce pandemic rules, which include an obligation to wear face masks in public, from Wednesday.

But the defence ministry said on Twitter the decision was not connected with the protests. 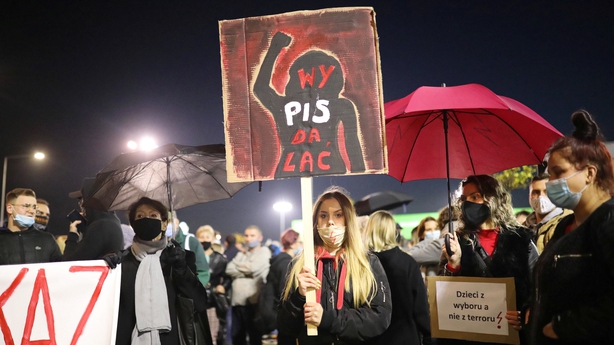 The government has called for a halt to the protests because of a rising number of coronavirus cases overwhelming the healthcare system, though except for isolated scuffles with the police the protests have been largely peaceful.

He said: "Pandemic rules are being broken."

Poland recorded 10,241 new coronavirus cases today, compared with a record of 13,632 on Friday.

Parliament is due to discuss the impact of the court ruling on the government's aid programme for families with disabled children tomorrow.

More protests are planned across Poland later this week, including a mass gathering in Warsaw on Friday.