Mr Lukashenko defied an ultimatum to surrender power by midnight, challenging his opponents to make good on a threat to paralyse the country with strikes, nearly three months after his disputed election victory unleashed mass protests.

If sustained, the strikes could open a new phase in the crisis, testing whether the opposition has the mass support it needs to bring enterprises across the country of 9.5 million people to a halt.

Previously, the opposition has mounted some strikes at state-run factories, but they were not sustained.

Local media reported groups of strikers at many major state-controlled enterprises. However, the prime minister's spokeswoman said all the country's major industrial companies were working normally.

Security officers in plain clothes stood next to vans outside the Minsk Tractor Works and Minsk Automobile Plant. One person was detained, a witness said.

Hundreds of students marched out of several universities in Minsk clapping and chanting as passing cars sounded their horns in support. 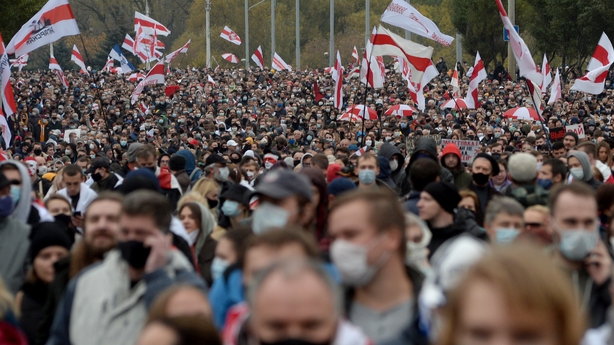 On one street, black-clad officers in masks poured out of vans, detaining people and dragging them away, footage from news website Tut.by showed.

One group of students sprinted away after being dispersed by police, footage from the Nasha Niva outlet showed.

Mr Lukashenko has scoffed, asking "Who will feed the kids?"

Yesterday Ms Tsikhanouskaya called for the strike to go ahead after police fired stun grenades and detained scores of people at protests by tens of thousands in Minsk and elsewhere, the 11th straight weekend of huge demonstrations.

"The regime once again showed Belarusians that force is the only thing it is capable of," she said in a statement. "That's why tomorrow, October 26, a national strike will begin."

If strikes come close to paralysing the country, it could be a further test of Russian support for its ally Mr Lukashenko. 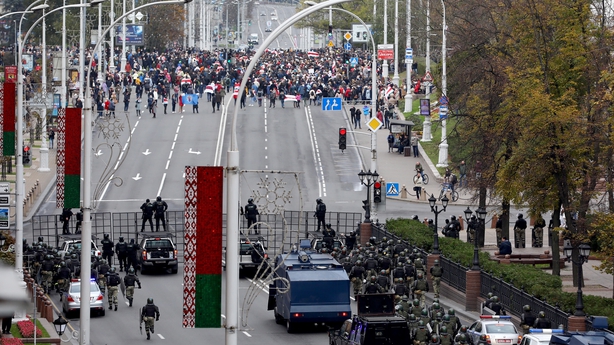 Since the crisis began, Russia has backed him with a $1.5 billion loan and increased security cooperation, including a series of joint military exercises and a visit last week by the head of Russia's foreign intelligence agency.

Russia even sent journalists to staff Belarusian state TV when employees quit in protest against what they described as propaganda.

Mr Lukashenko, 66, has been in power for 26 years. Official results showed him the winner of the 9 August election in a landslide.

The opposition and Western countries say the vote wa srigged, which he denies.

Around 15,000 people have since been arrested during a crackdown on mass demonstrations. Nearly all opposition leaders fled or were jailed.

Western countries have imposed travel bans and asset freezes against some officials they accuse of election fraud and human rights abuses, but have had to balance their support for the pro-democracy movement with reluctance to provoke Russia.