Seven people have been detained after armed forces personnel boarded an oil tanker off the Isle of Wight in Britain, following reports its crew had been threatened by stowaways.

Hampshire police had requested military assistance in dealing with the situation on board the 228-metre Nave Andromeda.

The British Ministry of Defence announced on Twitter tonight: "In response to a police request, the Defence Secretary and Home Secretary authorised Armed Forces personnel to board a ship in the English Channel to safeguard life and secure a ship that was subject to suspected hijacking.

"Armed forces have gained control of the ship and seven individuals have been detained. 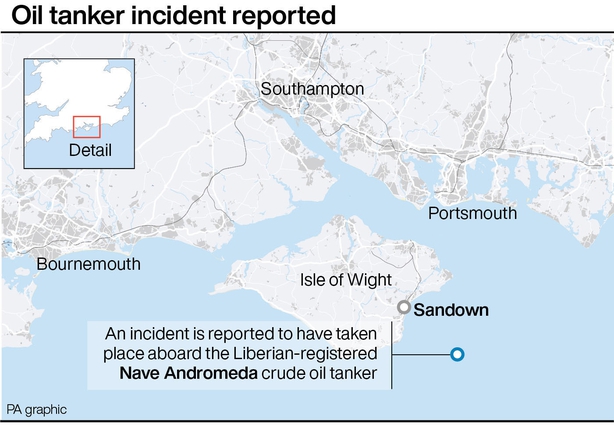 Concerns were raised with police over the welfare of the ship's crew, shortly after 10am this morning, Hampshire Police earlier said.

Police said the vessel, located around six miles off the coast of Bembridge on the Isle of Wight, had been travelling in the direction of Southampton.

It added in an earlier statement this evening: "It was reported that a number of stowaways were on board, and they had made verbal threats towards the crew. No one has been reported injured.

"An exclusion zone, with a three mile radius, is currently in place near the vessel."

Police were said to be working alongside the Maritime & Coastguard Agency and Border Force in responding to the incident.

John Thompson, co-founder of Ambrey, a maritime security firm advising the ship's Greek owners today, told the Financial Times that the incident was "definitely not a hijacking".

"It's stowaways who have got a bit rowdy with the crew," he told the newspaper.

According to maritime tracking websites, the Nave Andromeda had sailed from Lagos, Nigeria, on 5 October.

It is understood the tanker had been expected to dock in Southampton at 10.30am today and that the port received contact from the ship but it had not been refused entry to the harbour.

Two coastguard helicopters were scrambled to the scene and spotted circling the ship this afternoon.

Richard Meade, managing editor of shipping news journal Lloyd's List, earlier wrote on its website that he had received information that there were seven stowaways on board.

He said it was understood that the stowaways had been onboard since the ship left Nigeria, although it had also made anchorage stops in Las Palmas in the Canary Islands and south of Sant Nazaire, France.

Speaking to the PA news agency, he said: "The information I have got is that it was a case of stowaways being discovered on board and when the crew tried to get them into a cabin and tried to get their information, there was no documentation."