Braving the pandemic, thousands of Poles took to the streets to protest against a near-total ban on abortion in a country that already has some of the EU's most stringent restrictions.

Demonstrators rallied in several cities, furious with yesterday's ruling by Poland's constitutional court that existing legislation which allows for the abortion of malformed foetuses was "incompatible" with the protection of life.

The verdict drew an outcry from rights groups in and outside the deeply Catholic country.

"It's war" or "We're coming to get you, you sadists" read some of the banners decked with a red lightning image that has become a symbol of the protesters' anger.

"Yesterday's decision represents a total ban on abortion in Poland as 98% of legal terminations in Poland are related to foetal malformations," Krystyna Kacpura, head of the Federation for Women and Family Planning, told AFP.

"It's a disgrace from the Polish state towards half of the population, women. We'll never forget it."
Kacpura said the situation for women with modest means was particularly concerning.
"They will just be left with various dangerous methods like abortions performed by non-qualified people with methods I don't even want to discuss," she said. 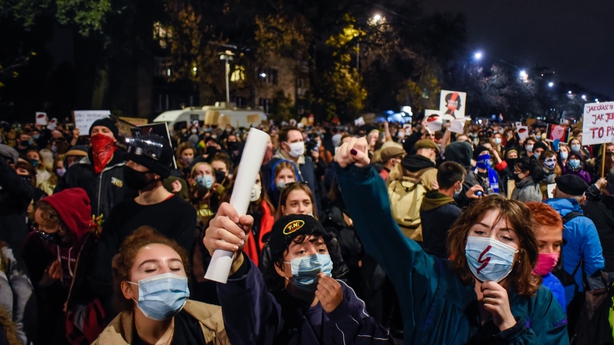 Ranks of police in riot gear barred their way from the house.

Elsewhere in Poland protesters gathered in main squares, outside PiS premises or near churches.
More protests are planned for Saturday.

The Polish court verdict drew immediate condemnation from the Council of Europe, the continent's leading human rights organisation, whose Commissioner for Human Rights Dunja Mijatovic called it "a sad day for #WomensRights".

Donald Tusk, a Pole who currently leads the European People's Party after presiding the European Council, called the timing of the abortion issue "political wickedness".

"Throwing the topic of abortion and a ruling by a pseudo-court into the middle of a raging pandemic is more than cynical," he tweeted.

The verdict is in line with what the governing right-wing Law and Justice (PiS) party wanted.
From now on, abortions will only be allowed in instances of rape or incest, or if there is a threat to the mother's life.

The Polish presidency and Archbishop Stanislaw Gadecki, the head of the Polish Episcopal Conference, welcomed the verdict.

The constitutional court has been reformed by the PiS government, and has since been accused of counting many judges loyal to the party in its ranks.

The country of 38 million people sees fewer than 2,000 legal abortions a year, but women's groups estimate that up to 200,000 procedures are performed illegally or abroad.