Israel hailed a new era in its relations with the Arab world after the announcement of plans to normalise ties with Sudan, an agreement Palestinians have described as a "new stab in the back".

"This is a new era. An era of true peace. A peace that is expanding with other Arab countries - three of them in recent weeks," Israeli Prime Minister Benjamin Netanyahu said in a video statement.

"In Khartoum, the capital of Sudan, the three principles of the Arab League were adopted in 1967: No peace with Israel, no recognition of Israel, and no negotiations with Israel," said Mr Netanyahu.

"Whereas today Khartoum says - yes to peace with Israel, yes to recognition of Israel and to normalization with Israel."

Israel's recent rapprochement with some of its Arab neighbors reflects shifting regional priorities and shared concerns about Iran.

However, Palestinians say Arab countries have set back the cause of peace by abandoning a long-standing demand that Israel give up land for a Palestinian state before it can receive recognition.

"The Palestinian presidency stresses its condemnation and its rejection to normalization of ties with the state of the Israeli occupation, which occupies the land of Palestine," said a statement published by Palestinian President Mahmoud Abbas's office, in Ramallah in the Israeli-occupied West Bank.

Wasel Abu Youssef, a senior member of Mr Abbas's Palestine Liberation Organization (PLO), said Sudan's move "represents a new stab in the back of the Palestinian people and a betrayal of the just Palestinian cause".

The announcement of a US-brokered deal between Israel and a third Arab state comes less than two weeks before US President Donal Trump faces voters in an election.

Mr Netanyahu tweeted about the deal, including in Arabic, and thanked Mr Trump and his team for their role in brokering it.

He said Israeli and Sudanese delegations would soon meet to discuss cooperation in areas including agriculture and trade.

But during a telephone call with Mr Trump - a close ally - Mr Netanyahu sidestepped remarks from Mr Trump denigrating his opponent Joe Biden, who leads in opinion polls.

HUGE win today for the United States and for peace in the world. Sudan has agreed to a peace and normalization agreement with Israel! With the United Arab Emirates and Bahrain, that's THREE Arab countries to have done so in only a matter of weeks. More will follow! pic.twitter.com/UHB8H6oaZc

"Do you think Sleepy Joe could have made this deal, Bibi, Sleepy Joe... Somehow I don't think so," Mr Trump asked Mr Netanyahu on the call.

Mr Netanyahu, reliant on bipartisan support for Israel in Washington, responded: "Uh ... one thing I can tell you is we appreciate the help for peace from anyone in America."

In Gaza, a Palestinian territory controlled by the Islamist group Hamas, a spokesman for the group, Fawzi Barhoum, told Reuters Sudan’s move was a step in the "wrong direction". Sudan, under President Omar Bashir who was deposed last year after 30 years in power, was long an ally of Hamas.

"Sudan joining other countries in normalizing ties with the Israeli occupation will encourage the Zionist enemy to commit more crimes and more violations against the Palestinian people," said Mr Barhoum. 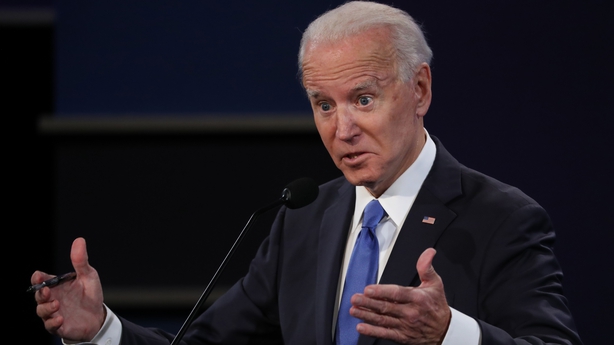 Meanwhile, Democrat candidate Mr Biden said that if elected president he would mandate coronavirus vaccines be free for all Americans, part of a national strategy to "get ahead of this virus."

"Once we have a safe and effective vaccine, it has to be free to everyone - whether or not you're insured,"

Mr Biden said in a speech laying out his pandemic response plan just 11 days before the US presidential election.

President Trump, who trails Mr Biden in the polls, has also stressed that a vaccine - which he says will be ready in the coming weeks - should be free.