President Emmanuel Macron has paid tribute to a French history teacher beheaded by an Islamist radical as a "quiet hero" dedicated to instilling the democratic values of the French Republic in his pupils.

Samuel Paty was attacked on his way home on Friday from the secondary school where he taught in the suburb of Conflans-Sainte-Honorine.

He had been the subject of an online hate campaign after showing pupils cartoons of the Prophet Mohammed during a civics class.

In a nationally televised memorial service presided over by Mr Macron, Mr Paty's coffin was carried into the courtyard of Sorbonne University in Paris to the soundtrack of the U2 song "One".

Atop the casket lay his Legion d'Honneur, France's highest decoration that was awarded posthumously to the slain teacher.

"He was killed precisely because he incarnated the Republic," a visibly emotional Mr Macron said.

"He was killed because the Islamists want our future. They know that with quiet heroes like him, they will never have it."

Abdullakh Anzorov decapitated Paty with a large knife on a street in a middle-class Paris suburb in last Friday in a killing officials called an attack on French values.

The murder has convulsed France, carrying echoes of the Islamist attack in 2015 on the offices of satirical magazine Charlie Hebdo, after it published cartoons of Prophet Mohammad.

In an act of solidarity, the Occitanie regional authorities projected a series of Charlie Hebdo's past political and religious cartoons, including those of the Prophet Mohammad, onto public buildings in the cities of Toulouse and Montpellier.

Mr Macron said: "Samuel Paty on Friday became the face of the Republic, of our desire to break the will of the terrorists ... and to live as a community of free citizens in our country."

Pupils at a school near Paris had pointed out the history teacher beheaded last week to his killer in return for €300 to €350, France's anti-terror prosecutor said.

The killer, 18-year-old Abdullakh Anzorov, gave part of the sum to a pupil outside the school, asking him to identify the teacher, prosecutor Jean-Francois Ricard told a news briefing.

Others joined them, and Mr Anzorov offered to share the rest of the money, Mr Ricard said.

In return he received a description of Mr Paty from two of the pupils who stayed with him for more than two hours waiting for the teacher to appear. Other pupils walked away.

The killer told the teenagers he was planning to "humiliate and strike" the teacher, and force him to apologise for showing the cartoons.

Two students aged 14 and 15 were among seven people suspected of complicity to murder in a terrorist endeavour o rassociation with a terrorist and handed over to a judge to determine whether they should be placed under investigation - at which point they would be treated as formal suspects.

They are among seven people facing prosecution for "conspiracy to commit a terrorist murder."

Mr Ricard said: The investigation has revealed the killer knew the name of the teacher and the school, but did not have a description of Mr Paty.

"He could only identify him because he had the help of pupils at the school."

The seven people facing prosecution, including the two pupils, will appear before an anti-terror judge for a decision on criminal charges.

Police have carried out dozens of raids since the killing, while the government has ordered the six-month closure of a mosque outside Paris and plans to dissolve a group it said supported Palestinian militant group Hamas.

Mr Paty had been the subject of an online hate campaign after he showed pupils cartoons of the prophet in a civics class, the same images that sparked a bloody assault on the offices of satirical magazine Charlie Hebdo five years ago.

A photo of Mr Paty and a message claiming responsibility for his murder were found on the phone of his killer, Abdullakh Anzorov, originally from the Russian region of Chechnya.

Mr Anzorov tweeted images of the teacher's decapitated body before he was shot dead by police.

Nine of 16 people held over the murder were released from custody late last night, including four members of Mr Anzorov's family and three school pupils. 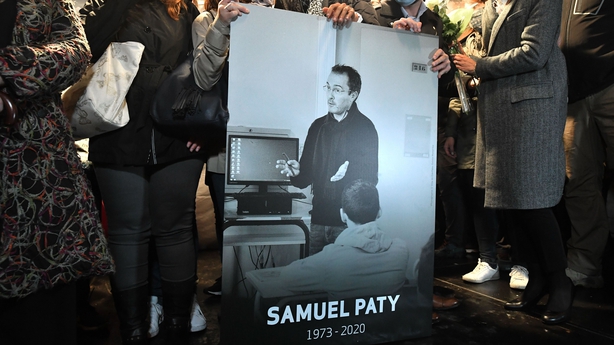 Among those due to appear in court later are a disgruntled parent from Mr Paty's school, who had fired up anger about his lesson through messages on social media, urging "mobilisation" against the teacher.

The parent had exchanged messages with Mr Anzorov via WhatsApp in the days leading up to the murder.

The material he uploaded was widely shared, including by a mosque in the northern Paris suburb of Pantin, which the government will close for six months for spreading material likely to provoke "hatred and violence".

The group's founder, Islamist radical Abdelhakim Sefrioui, is among those in custody over the murder.

Interior Minister Gerald Darmanin has accused him and the school parent of having issued a "fatwa" against Mr Paty.

Hamas said in a statement that it had "no links" to the collective and Mr Sefrioui had no "organisational relationship" with the Palestinian movement.

The French government has earmarked another 50-odd other organisations with links to "radical Islam" for dissolution.

Yesterday, in a phone call with his Russian counterpart Vladimir Putin, Mr Macron asked Moscow for stronger cooperation in the fight against terror.

Russia has rejected any association with the killer.

Mr Putin offered Mr Macron his condolences over the "barbaric murder", according to the Kremlin, and the two leaders "reaffirmed their mutual interest in intensifying joint efforts to combat terrorism and the spread of extremist ideology".