Thirteen men, including members of two right-wing armed groups, have been arrested for plotting to kidnap the Democratic governor of the US state of Michigan and "instigate a civil war", officials said.

Announcing the arrests, Michigan Attorney General Dana Nessel described the conspiracy to kidnap the 49-year-old Ms Whitmer as a "serious and credible threat".

Andrew Birge, US attorney for the western district of Michigan, said six men were facing federal charges for conspiring to kidnap Ms Whitmer from her holiday home.

Mr Birge said the men had conducted surveillance of her residence and even tested a homemade bomb they intended to use to divert police away from her house.

FBI agents and Michigan police arrested them on Wednesday as they met to "pool funds for explosives and exchange tactical gear," the Justice Department said.

Mr Trump has repeatedly attacked Ms Whitmer over her tough coronavirus lockdown, and armed right-wing groups have staged protests against her in the state capital Lansing. 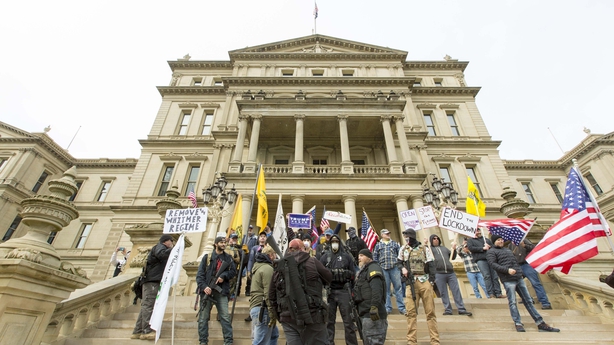 "Rather than say thank you" for the FBI action, Mr Trump said, "she calls me a White Supremacist".

Without explicitly condemning the plotters, Mr Trump said: "I do not tolerate ANY extreme violence. Defending ALL Americans, even those who oppose and attack me, is what I will always do as your President!"

Ms Whitmer said that when she took the oath of office "I knew this job would be hard," but "never could have imagined anything like this".

She added: "We are not one another's enemy. This virus is our enemy."

Ms Whitmer pointed to Mr Trump's refusal at the recent debate with Democrat Joe Biden to condemn white supremacists and "hate groups" like the two Michigan armed groups that allegedly targeted her.

"Stand back and stand by, he told them," she said.

"Hate groups heard the president's words not as a rebuke but as a rallying cry, as a call to action," she added.

"When our leaders meet with, encourage, or fraternise with domestic terrorists they legitimise their actions, they are complicit."

Mr Biden also sought to pin some blame on the Republican president.

He said in a statement that he spoke to Ms Whitmer, who was on the shortlist to become his vice presidential candidate, and commended the FBI and police "for their work to prevent this deranged act by emboldened domestic terrorists". 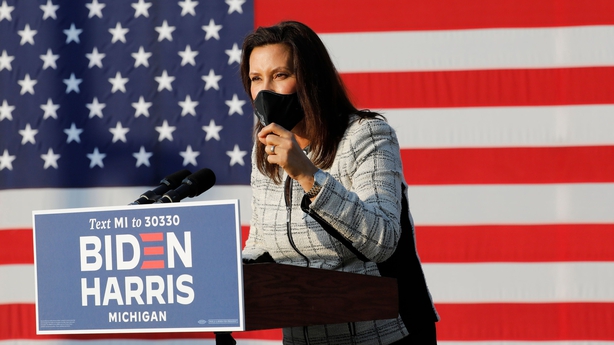 He said that Mr Trump "is giving oxygen to the bigotry and hate we see on the march in our country. We have to stop it".

They are suspected of attempting to identify the home addresses of law enforcement officers in order to target them and "instigate a civil war," the attorney general said.

They also planned to attack the capitol building in Lansing and kidnap government officials including Ms Whitmer, she said.

The seven were charged with various offences, including providing material support for terrorist acts, gang membership and firearms violations.

A sworn affidavit from an FBI agent detailed the outlines of the plot to kidnap Ms Whitmer.

The FBI said it became aware through social media in early 2020 "that a group of individuals were discussing the violent overthrow of certain government and law-enforcement components".

Graphic on the plot to kidnap the Democratic governor of the US state of Michigan and "instigate a civil war", which was revealed with the arrest of 13 alleged plotters@AFPgraphics pic.twitter.com/j1llUZsaiA

A confidential informant attended a meeting in June of around 14 people, the FBI said, where the group "talked about creating a society that followed the US Bill of Rights and where they could be self-sufficient".

"They discussed different ways of achieving this goal from peaceful endeavours to violent actions," the affidavit said.

"At one point, several members talked about state governments they believed were violating the US Constitution, including the government of Michigan and Governor Gretchen Whitmer," it said.

"Several members talked about murdering 'tyrants' or 'taking' a sitting governor," it said.

Mr Croft is a resident of Delaware, while the other five live in Michigan.

The affidavit said Mr Fox was recorded in June saying he needed 200 men to "storm the capitol building in Lansing, Michigan, and take hostages, including the governor".

"Fox explained they would try the governor of Michigan for 'treason,' and he said they would execute the plan before the November 2020 elections," the affidavit said.