Greece and Cyprus have welcomed an EU summit statement threatening Turkey with sanctions if it continues to drill for gas in disputed Mediterranean waters.

European Union leaders issued a declaration warning Turkey it must halt gas exploration activities in waters claimed by Greece and Cyprus and urging it to commit to talks.

The statement was agreed by all 27 EU leaders after seven hours of haggling, with Greece and particularly Cyprus pushing for a tougher line while other countries argued for a more conciliatory approach towards Turkey.

Greek Prime Minister Kyriakos Mitsotakis said the EU had sent "a message of unity, solidarity and determination", which left Turkey in no doubt that it must stop its "unilateral actions".

"It also made abundantly clear the consequences that will occur should Turkey continue its aggressive behaviour," he said.

"Greece is absolutely satisfied by the results of the summit."

Cypriot President Nicos Anastasiades also voiced his satisfaction and said sanctions were "not an end in themselves".

"The priority is to end lawless actions by Turkey and create a positive climate to give room to constructive dialogue," he said.

"Turkey must now decide what it will do, and what path it will follow."

Turkey rejected the threat of sanctions as "unconstructive".

"The continued use of the language of sanctions is unconstructive," the Turkish foreign ministry said.

"The EU must now understand it will get nowhere with such discourse."

Turkey has infuriated the EU by sending research ships with naval escorts to work in waters the EU says belong to Greece and Cyprus. 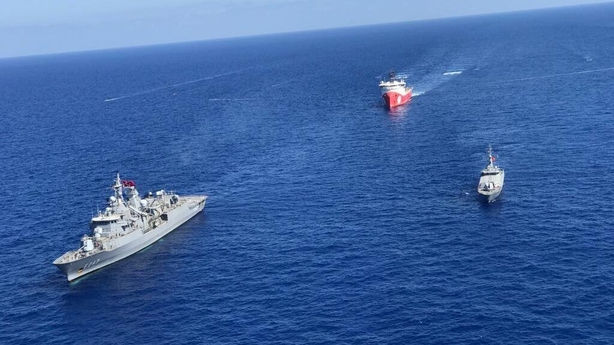 But tension between Turkey and Greece has eased in the last two weeks with the two sides agreeing to resume long-stalled political talks, as well as setting up a military hotline at NATO to avoid any accidental clashes in the area.

Mr Mitsotakis said Greece was looking forward to the resumption of the talks, which were stalled since 2016.

Ahead of the summit, Cyprus had pushed for the EU to expand its list of individuals and entities sanctioned over the drilling activities.

The leaders' declaration fell some way short of this, but Mr Anastasiades defended his decision to give it his blessing.

He said the choice was "whether to impose sanctions on five or six companies and persons or whether, using diplomacy, to give another opportunity to de-escalating the crisis and ending one-sided actions".

The summit declaration also called for a "multilateral conference on the eastern Mediterranean", though the details of this, notably who would take part, have yet to be decided.