French President Emmanuel Macron has said that Belarus's leader Alexander Lukashenko must step down, after the EU refused to recognise him as the legitimate president of the ex-Soviet country.

"It's clear he has to go," Mr Macron told French newspaper the Journal du Dimanche ahead of a trip to EU states Lithuania and Latvia, which border Belarus.

"It is a crisis of power, an authoritarian power that cannot accept the logic of democracy and which is hanging on by force. It is clear that Lukashenko has to go."

Tens of thousands of people have taken to the streets in Belarus since the 9 August election which opposition leader Svetlana Tikhanovskaya says she won, despite Mr Lukashenko's insistence he took a landslide victory.

The embattled leader has launched a brutal crackdown against the protesters with 12,000 arrested - drawing condemnation from the West, but support from Moscow.

Fresh protests were sparked by the surprise announcement on Wednesday that Mr Lukashenko had been sworn in for a sixth term in office.

The European Union said the inauguration lacked "democratic legitimacy" and refused to recognise him as president.

It will debate the Belarus situation at an EU summit on Thursday and Friday in Brussels.

More than 90 people - most of them women - were arrested yesterday at opposition rallies, according to one NGO. 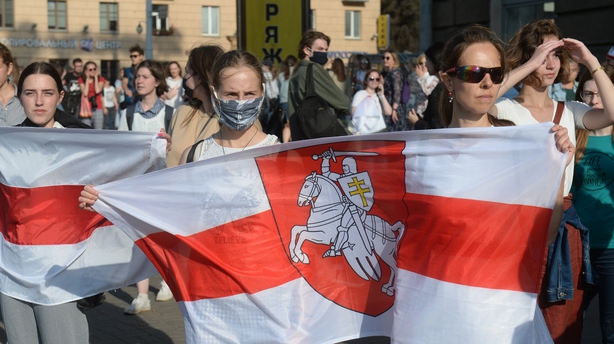 Mr Macron today said he had been "impressed by the courage of the protesters".

"They know the risks they are taking by demonstrating every weekend, and yet, they are pushing forward with the movement to make democracy come alive in this country that has been deprived of it for so long," he said.

"Women in particular, who march every Saturday, command our respect," the French president added.

"We are seeing attempts to destabilise the situation in the country," he told the United Nations General Assembly in a video statement.

"Interference in our internal affairs, sanctions and other restrictions on Belarus will have the opposite effect, and are harmful for absolutely everyone."