Rescue teams kept up their search for survivors in Beirut, even as hopes raised by sensor readings of a pulse beneath the rubble of last month's blast began to fade.

The cataclysmic explosion on 4 August in the port of Beirut killed at least 191 people, making it Lebanon's deadliest peacetime disaster. One month on, seven people are still listed as missing.

On Wednesday night, a sniffer dog deployed by Chilean rescuers detected a scent beneath a collapsed building in the heavily damaged Gemmayzeh neighbourhood adjacent to the port.

High-tech sensors confirmed an apparent heartbeat and, a full month after the blast, rescue teams took up the search.

However despite removing piles of masonry, they have yet to find the source of the sensor reading.

"Search operations have been going on since the day before yesterday but the chances are very low," the civil defence agency's operations director, George Abou Moussa, said.

"So far, we have found nothing."

The search team is in its third straight day of digging, much of it by hand.

"We are not leaving the site until we've finished going through the rubble, even if a new building collapse threatens," said civil defence officer Qassem Khater.

Chilean specialist Walter Munoz put the chances of finding a survivor at "2%".

Lebanese officials had played down the chances of anyone surviving so long beneath the rubble.

However even the faint hope of a miracle caught the imagination of a country already reeling from the coronavirus pandemic and the country's worst economic crisis in decades. 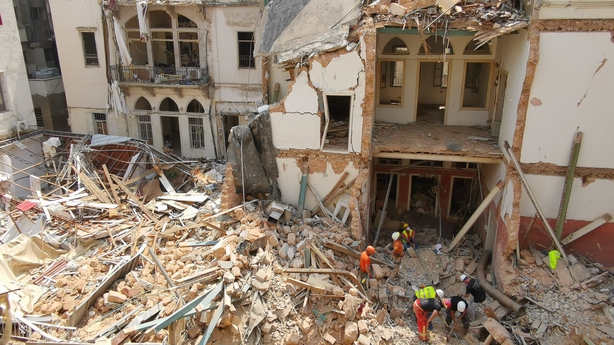 "I was not aware I needed a miracle that much. Please God, give Beirut this miracle it deserves," said Selim Mourad, a 32-year-old filmmaker.

Lebanon lacks the tools and expertise to handle advanced search and rescue operations, so they have been supported by experts from Chile, France and the Unites States.

The Chileans, in particular, have been praised as heroes by many Lebanese on social media, who have compared their expertise with the lacklustre performance of what they see as an absent state.

The country observed a minute's silence for the dead yesterday.