Japanese coast guard rescuers are searching for the remaining 42 crew of a ship believed to have sunk in a typhoon, after a lone survivor was found bobbing in a lifejacket.

The Gulf Livestock 1, which was carrying a cargo of nearly 6,000 cows, issued a distress call in the early hours of yesterday morning from a position 185km (115 miles) west of Japan's Amami Oshima island.

Dramatic photos and video released by the coast guard showed the man floating in the darkness in an orange life jacket and being pulled onto a boat with a rope as rescuers battled violent, rolling waves.

He was quickly brought to a large vessel, where coast guard personnel with surgical masks and gloves wrapped him with blankets.

"Water," said the man, who identified himself as a Filipino in the video.

"Thank you, thank you very much."

Japanese officials said he was the first crew member to be rescued from the ship. 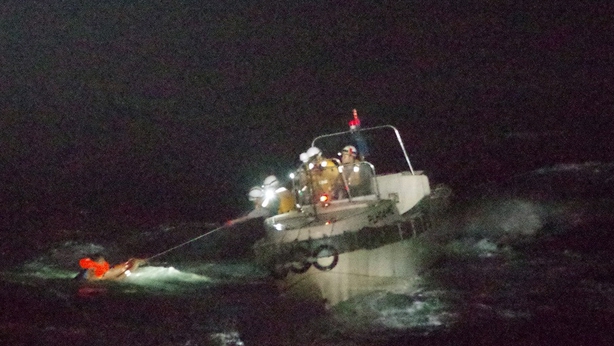 The man told rescuers that he had put on a life jacket and dived into the sea after a warning announcement on board, when powerful Typhoon Maysak was passing through the area.

He said one of the boat's engines had stalled and a wave then overturned the ship, which later sank, the coast guard said in a statement.

There were no details on when and where the ship sank, but the man said he had not seen other crew members while waiting to be rescued.

Typhoon Haishen was in the northwest Pacific, tracking through the East China Sea towards South Korea.

A rubber boat was spotted late last night in the area being searched for survivors, but the coast guard said they had not confirmed if it was linked to the ship.

Japan is currently in its annual typhoon season, and a second massive storm is on course to arrive in the same area around Sunday, according to local forecasters, potentially limiting the time the coast guard can continue to search.

The ship was carrying a crew of 39 Filipinos, two New Zealanders and two Australians, and was charged by Australia-based Australasian Global Exports to carry the livestock.

It was reportedly travelling from Napier in New Zealand to the Chinese port of Tangshan.

Australasian Global Exports said it was in contact with the families of some of the crew, as well as with local authorities, but offered no further details.

"Our thoughts and prayers are also with the ship's officers, crew and other personnel and their families," it added.

"MPI wants to understand what happened on the sailing of the Gulf Livestock 1," it said.