The Khmer Rouge commander known as 'Comrade Duch', Pol Pot's premier executioner and security chief who oversaw the mass murder of at least 14,000 Cambodians at the notorious Tuol Sleng prison, has died.

Kaing Guek Eav or 'Comrade Duch' was the first member of the Khmer Rouge leadership to face trial for his role within a regime blamed for at least 1.7 million deaths in the "killing fields" of Cambodia from 1975 to 1979.

Mr Pheaktra gave no details of the cause of death, but Duch had been ill in recent years.

In 2010, a UN tribunal found him guilty of mass murder, torture and crimes against humanity at Tuol Sleng prison, the former Phnom Penh high school which still stands as a memorial to the atrocities committed inside.

He was given a life sentence two years later after his appeal that he was just a junior official following orders was rejected.

Duch - by the time of his trial a born-again Christian - expressed regret for his crimes.

Under Duch's leadership, detainees at Tuol Sleng prison, code named "S-21", were ordered to suppress cries of agony as Khmer Rouge guards, many of whom were teenagers, sought to extract confessions for non-existent crimes through torture.

The guards were instructed to "smash to bits" traitors and counter-revolutionaries.

For the Khmer Rouge, that could mean anyone from school teachers to children, to pregnant women and "intellectuals" identified as such for wearing glasses.

Who were the Khmer Rouge?

Beneath Tuol Sleng's chaotic facade, Duch - himself a former maths teacher - had an obsessive eye for detail and kept his school-turned-jail meticulously organised.

"Nothing in the former schoolhouse took place without Duch's approval. His control was total," wrote photographer and author Nic Dunlop, who found Duch in 1999 hiding near the Thai border, two decades after the Khmer Rouge fell.

"Not until you walk through the empty corridors of Tuol Sleng does Stalin's idiom that one death is a tragedy - a million a statistic, take on a terrifying potency," Mr Dunlop wrote in his account of Duch and his atrocities, "The Lost Executioner". 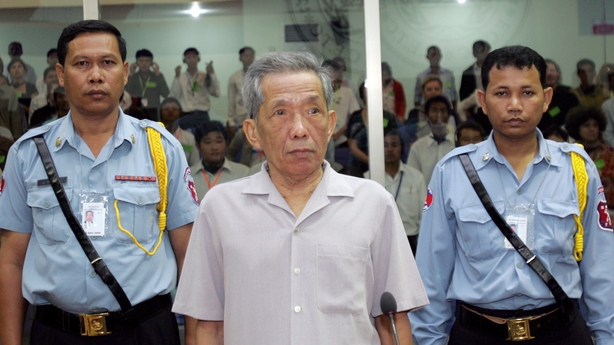 At S-21, new prisoners had their mugshots taken. Hundreds are now on display within its crumbling walls.

Norng Chan Phal, one of the few people to have survived S-21, was a boy when he and his parents were sent to Duch's prison and interrogated on suspicion of having links to the Khmer Rouge's mortal enemy, Vietnam.

His parents were tortured and killed but Mr Chan Phal survived to give testimony at Duch's trial in 2010.

"He apologised. But justice is not complete".