On 12 August 2000, the Kursk nuclear submarine, pride of Russia's Northern Fleet, sank after a torpedo exploded, and the fate of its 118 crew captivated the nation until the tragic conclusion nine days later.

Here is a look back at the events 20 years ago in what remains the Russian navy's worst-ever disaster. 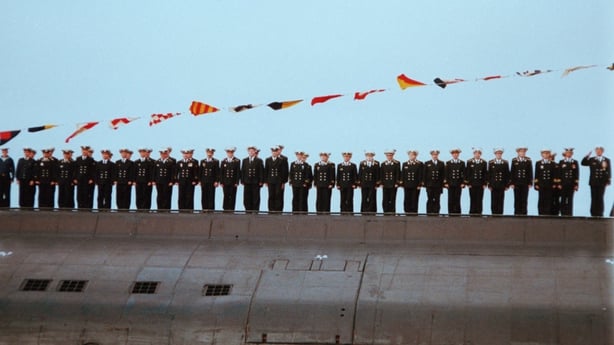 On that Saturday morning, the Kursk, a huge 154-metre-long submarine, takes part in naval exercises in the Barents Sea on the borders between Russia and Norway.

At 11:28am Norwegian seismographers register a major explosion followed by a second more powerful one two minutes later.

The Russian navy locates the vessel at dawn on Sunday. All radio contact with the crew is lost.

The only recording will be the SOS signal one seaman onboard the submarine makes by banging against the hull of the craft.

Towards the end of the day the navy deploys a first mini-submarine manned by rescuers, but it collides with the wreckage of the Kursk and has to return immediately.

"Technical problems" is the terse summary the Russian navy uses on 14 August to announce the accident to the public, after a two-day delay.

Russia's navy chief says the main theory of events "is an explosion in the first torpedo hatch", which would have led to the submarine sinking in neutral waters 150km (90 miles) from the coastal town of Severomorsk, the Northern Fleet's main base.

The navy says the vessel has shut down its nuclear engines and is not carrying any nuclear weapons. No radioactive leak is recorded.

According to the navy, the crew, trapped 108 metres down at the bottom of the Barents Sea, has enough oxygen to last until 18 August.

Despite concerns for the sailors, Russia refuses offers of help from Britain, Norway and the United States.

With only old or unsuitable equipment, and battling a violent storm, the Russians pursue their rescue efforts alone, ratcheting up a series of failures.

He waits until August 16 before making his first statement, appearing in casual dress, describing the situation as "critical".

"Our experts say that we have everything we need," he is quoted by Interfax as saying.

But just hours later he speaks with US counterpart Bill Clinton on the telephone to discuss the rescue mission.

Finally, Russia accepts help from Britain and requests assistance from Norway, though Mr Putin does not cut short his holiday and his "deafening" silence draws media fire.

"From the word go, the rescue operation should have been not only the number one concern of the rescue teams but of the whole of the state," says the daily Izvestiya.

The press accuses the military of lies and questions the cost of human life in post-communist Russia.

As the uncertainty drags on, families of the trapped sailors describe their anguish as a living "hell".

"Each television news report is like a stay of execution," says one woman whose commander husband is on board.

On August 18, Mr Putin returns to Moscow. The chances of a successful rescue "are very small, but they exist", he says.

On 21 August, after 30 hours, Norwegian divers manage to open the submarine's airlock. The interior of the Kursk is completely flooded. All the seamen are dead.

The following day in Vidyayevo, the small coastal navy village and home base for the Kursk, the crew members' families gather and Mr Putin faces the criticisms of tearful widows.

A day of national mourning is declared on 23 August, but the bereaved families refuse to take part.

Mr Putin says he bears "a feeling of full responsibility and a feeling of guilt for this tragedy".

The Russian prosecutor's office concludes its investigation in July 2002 declaring no one can be held responsible.

It says the accident resulted from an explosion in one of the submarine's torpedo tubes caused by volatile fuel and the crew could not be saved.

They died at the latest eight hours after the blast.

A scribbled note by one officer, discovered in October 2000 in the man's pocket when rescue workers raised his body from the sub, provides cruel evidence that at least 23 sailors survived several hours after the explosion, having tried to seek safety in the vessel's rear.