A huge explosion in port warehouses near central Beirut has killed more than 70 people and injured more than 2,750 in the Lebanese capital.

Officials expected the death toll to rise further after the blast as emergency workers dug through rubble to rescue people and remove the dead.

It was the most powerful explosion to hit Beirut in years.

Lebanon's prime minister said about 2,750 tonnes of ammonium nitrate were stored in the warehouse that exploded.

Prime Minister Hassan Diab said: "It is unacceptable that a shipment of 2,750 tonnes of ammonium nitrate has been present for six years in a warehouse, without taking preventive measures," he said at a defence council meeting.

"I promise you that this catastrophe will not pass without accountability," Prime Minister Diab told the nation.

"Those responsible will pay the price," he said in his televised address, adding that details about the "dangerous warehouse" would be made public. 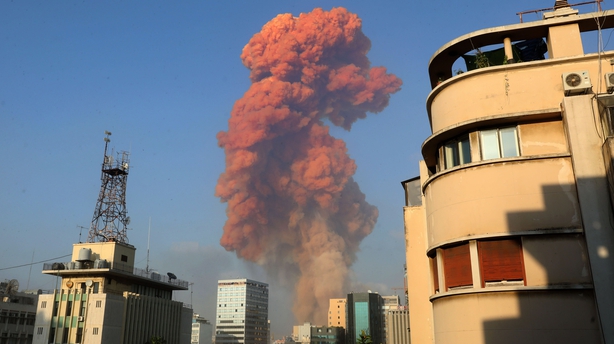 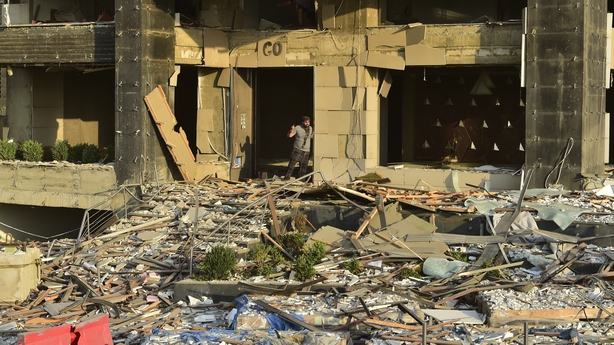 Israel, which has fought several wars with Lebanon, denied any role and offered help.

"What we are witnessing is a huge catastrophe," the head of Lebanon's Red Cross George Kettani told broadcaster Mayadeen.

"There are victims and casualties everywhere."

Hours after the blast, which struck shortly after 6pm local time, a fire still blazed in the port district, casting an orange glow across the night sky as helicopters hovered and ambulance sirens sounded across the capital.

A security source said victims were taken for treatment outside the city because Beirut hospitals were packed with wounded.

Red Cross ambulances from the north and south of the country and the eastern Bekaa valley were called in to help.

The blast was so big that some residents in the city, where memories of heavy shelling during the 1975 to 1990 civil war live on, thought an earthquake had struck.

My flat is completely destroyed. Not just windows blown in- like door and window frames ripped out. The cats are alive thank god. pic.twitter.com/0ujviXKVVz

The Embassy is aware of an explosion in Beirut this evening. Irish citizens who may require assistance should contact the Embassy. We advise all citizens to shelter in place until they can move safely. We also advise that you follow the instructions of Lebanese authorities. pic.twitter.com/8dJ6xGGleK

It has been confirmed that Irish troops serving in south Lebanon as part of a multinational peacekeeping force are safe and accounted for.

An explosion occurred this evening in the port area of Beirut in Lebanon. Please note that all IRISHPOLBATT personnel are safe and accounted for.

Germany's foreign minster said staff at its embassy had been injured in the explosion.

"We cannot for the moment exclude German nationals figuring among the dead and wounded."

The German embassy building, located not far from the port, was damaged but the "seriousness of the damage cannot yet be determined for now," the foreign ministry said.

Chancellor Angela Merkel said through her spokeswoman that she was shocked by the event and promised aid for Lebanon.

"France stands and will always stand by the side of Lebanon and the Lebanese. It is ready to provide assistance according to the needs expressed by the Lebanese authorities," he said in a tweet.

Footage of the explosion shared by residents on social media showed a column of smoke rising from the port followed by an enormous blast, sending a white cloud and fireball into the sky.

Those filming the incident from high buildings 2km from the port were thrown backwards by the shock.

It was not immediately clear what caused the initial blaze that set off the blast.

Lebanon's Red Cross said hundreds of people had been taken to hospitals.

The governor of Beirut port told Sky News that a team of firefighters, who were battling the initial blaze, had "disappeared" after the explosion.

Prime Minister Diab called for a day of mourning tomorrow.

The explosion occurred three days before a UN-backed court is due to deliver a verdict in the trial of four suspects from the Shia group Hezbollah over a 2005 bombing which killed former Prime Minister Rafik al-Hariri and 21 others.

Hariri was killed by a huge truck bomb on the same waterfront, about 2km from the port.

Israeli officials said Israel had nothing to do with the blast and said their country was ready to give humanitarian and medical assistance to Lebanon.

Western countries including the United States, Britain and France also said they were ready to assist.

Images showed port buildings reduced to tangled masonry, devastating the main entry point to a country that relies on food imports to feed its population of more than 6 million.

It threatens a new humanitarian crisis in a nation that hosts hundreds of thousands of Syrian refugees and which is already grappling with economic meltdown under one of the world's biggest debt burdens.

Residents said glass was broken in neighbourhoods on Beirut's Mediterranean coast to suburbs several kilometres away.

In Cyprus, a Mediterranean island 180km across the sea from Beirut, residents heard the blast. One resident in Nicosia said his house and window shutters shook.