The United States has called for the UK and countries around the world to form a coalition aimed at persuading China to change course as tensions continued to mount between China and the West.

US Secretary of State Mike Pompeo welcomed steps taken by the UK - including a ban on Huawei's involvement in 5G networks and the suspension of an extradition treaty with Hong Kong - but he said countries needed to work together to increase pressure on Beijing.

"I want to take this opportunity to congratulate the British Government for its principled response to these challenges," he said.

"We support those sovereign choices, we think 'well done'."

However he indicated that more was needed from allies including the UK to respond to the increasingly assertive China under Xi Jinping.

"We think that the entire world needs to work together to ensure that every country - including China - behaves in the international system in ways that are appropriate and consistent with the international order.

"You can't go make claims for maritime regions that you have no lawful claim to. You can't threaten countries and bully them in the Himalayas. You can't engage in cover-ups and co-opt international institutions like the World Health Organization."

"We want every nation to work together to push back against the Chinese Communist Party's efforts in every dimension that I have described," he said.

"That certainly includes the United Kingdom, it includes every country.

"We hope we can build out a coalition that understands the threat and we'll work collectively to convince the Chinese Communist Party it's not in their best interests to engage in this kind of behaviour."

Mr Raab insisted that the UK Government would not be pushed into a tougher position by the US administration. 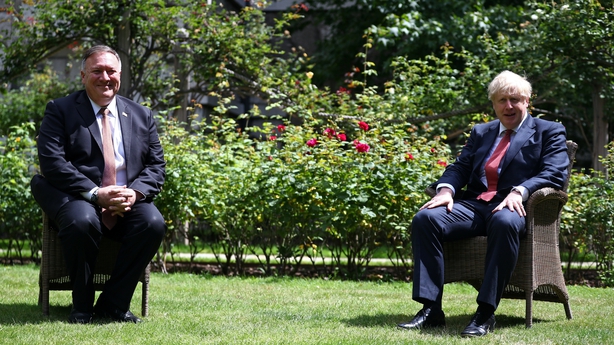 "I don't think there is any question of strong-arming - Mike and I always have constructive discussions," he said at a press conference alongside his US counterpart.

Pressed on Mr Pompeo's meeting with Tory MPs, Mr Raab said: "When I go to Washington I meet with folks on the Hill in all parties, on all sides - quite right."

China has warned that Britain will "bear the consequences" of its actions over Hong Kong.

A spokesman for the Chinese Embassy in London said in a statement Beijing had expressed its concerns over the UK interfering in Hong Kong matters "which are internal affairs of China".

Downing Street said Mr Johnson and Mr Pompeo used their talks to consider "shared global security and foreign policy issues, including China's actions in Hong Kong and Xinjiang" where there are concerns about the alleged abuse of the Uighur Muslims.

They also discussed the importance of the Five Eyes alliance, the US, UK, Canada, Australia and New Zealand, taking an "ambitious approach to working together on the technologies of the future", something apparently aimed at ending the reliance on Chinese technology from firms such as Huawei.

Downing Street rejected China's condemnation of the UK's actions over the extradition treaty and the extension of an arms embargo to cover Hong Kong.

It was a "reasonable and proportionate response to China's failure to live up to its international obligations with respect to Hong Kong", the Prime Minister's official spokesman said.

The UK has accused China of breaking the terms of an international treaty by imposing the national security law, which the Government believes undermines some of the autonomy Hong Kong has previously enjoyed.

China has reacted furiously to the UK's actions over both Hong Kong and Huawei.

A spokesman for the Chinese embassy said: "Now the UK side has gone even further down the wrong road in disregard of China's solemn position and repeated representations.

"It once again contravened international law and the basic norms governing international relations and blatantly interfered in China's internal affairs in an attempt to disrupt the implementation of the national security law for Hong Kong SAR and undermine the city's prosperity and stability.

"China urges the UK side to immediately stop interfering in Hong Kong affairs, which are China's internal affairs, in any form.

"The UK will bear the consequences if it insists on going down the wrong road."