US Homeland Security officials have said they have no intention of pulling back in Portland, Oregon, after a federal crackdown on anti-racism protests that included the use of unmarked cars and unidentified officers in camouflage.

Weeks of protests in Portland over police brutality and systemic racism intensified as federal officers began cracking down on crowds last week, using tear gas to disperse protesters and taking some into custody without explanation.

The Department of Homeland Security (DHS) sent law enforcement units to Portland to help guard US government facilities after receiving intelligence about planned attacks around 4 July, the DHS officials said.

"DHS is not going to back down from our responsibilities. We are not escalating, we are protecting," Chad Wolf, acting secretary of Homeland Security, told Fox News.

About 1,500 demonstrators gathered last night outside the federal courthouse, which has been the centre of protests since the 25 May killing of George Floyd by Minneapolis police.

There were more people than the week before, with some in the crowd reinvigorated by the news of federal law enforcement officers potentially acting unlawfully in their city.

Tear gas canisters followed, filling the square outside the courthouse and forcing much of the crowd away. 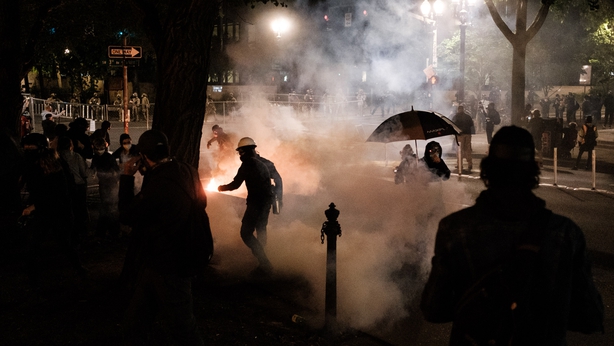 Early today, Portland Police said federal agents used tear gas to disperse the crowd and moved to extinguish a fire that was lit within a portico of the courthouse.

Police did not engage with protesters and did not use tear gas, the department said.

"We're not going to apologise for it," he said. "We're going to do it professionally and do it correctly."

US President Donald Trump condemned protests in Portland and violence in other "Democrat-run" cities yesterday as his Republican administration moves to intervene in urban centres he says have lost control of demonstrations.

Protests began across the country after the death of George Floyd, one in a long line of black Americans killed by police.

The clampdown in the liberal city has drawn widespread criticism and legal challenges as videos surfaced of officers without clear identification badges using force and unmarked vehicles to arrest protesters without explanation. 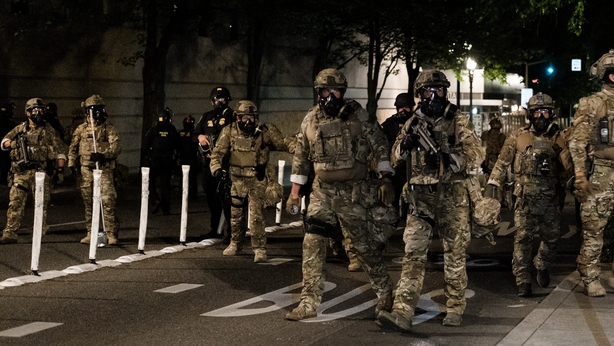 Ken Cuccinelli, the acting Department of Homeland Security (DHS) deputy secretary, said today the federal officers wore the same uniforms every day and the crowds knew who they were. He also defended the use of unmarked cars as routine.

"Unmarked police vehicles are so common it's barely worth discussion," he told CNN.

Mr Cuccinelli said if federal authorities receive the same kind of intelligence threat in other places, they would respond the same way. "It's really as simple as that," he said.

Yesterday, Democrats in the US House of Representatives demanded internal investigations into whether the Justice and Homeland Security departments "abused emergency authorities" in handling the Portland protests.

Portland's mayor called the intervention an abuse of federal power and said it was escalating the violence. Oregon's attorney general filed a lawsuit against the federal agencies, saying they had seized and detained people without probable cause.

Mr Cuccinelli dismissed local leaders' calls to leave the city. "We will maintain our presence," he said.