Taiwanese politicians threw punches and water balloons inside the legislature, the third parliamentary brawl in a fortnight, over the nomination of the head of a top government watchdog.

The Kuomintang (KMT), who are the main opposition in Taiwan's parliament, has mounted a noisy campaign against the nomination of Chen Chu to head the Control Yuan, an independent government watchdog.

The KMT, soundly beaten by Tsai Ing-wen and her Democratic Progressive Party (DPP) in elections in January, this week occupied parliament's main chamber for three days, trying to thwart Ms Chen from taking the post.

Several KMT lpoliticians knocked down voting booths inside the chamber to block DPP legislators from casting ballots over the nomination.

KMT has accused the DPP of cheating in part of the vote on nomination this week.

The voting today went ahead despite shouting and protests from KMT lawmakers, who held banners reading "invalid vote".

About 100 KMT supporters outside parliament fought with police and some tried to break through barricades, calling on the DPP to withdraw the nomination.

"Rejection to cronyism. Withdraw the nomination," KMT Chairman Johnny Chiang told supporters on the back of a truck outside the parliament. 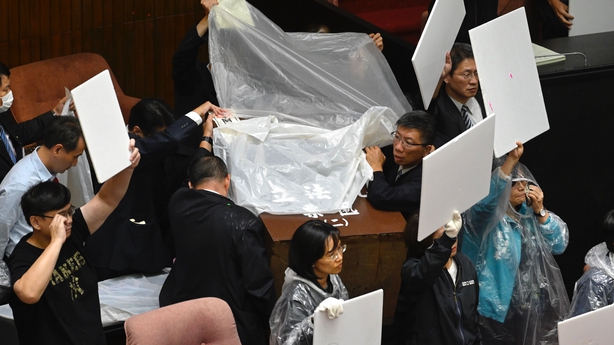 Taiwan is a boisterous, sometimes unruly democracy. Punch-throwing and rowdy protests are not uncommon in parliament.

The DPP has a large parliamentary majority, and has been angered by the targeting of Ms Chen, who was jailed in 1980 for helping lead pro-democracy demonstrations against the then-KMT government when Taiwan was a dictatorship.

The KMT, has been trying to reinvent itself since its election defeat, having failed to shake off DPP accusations they were too pro-China.

The party traditionally favours closer ties with China, which claims Taiwan as its own territory.

The KMT faces a further challenge next month in a mayoral by-election in the major southern metropolis of Kaohsiung, traditionally a DPP stronghold.

Kaohsiung's previous KMT mayor was thrown out of office in are call vote in June.