Up to 14 people are feared dead at a nursing home in western Japan as record rainfall triggered massive floods and landslides.

The torrential rain has forced authorities to issue evacuation advisories for more than 200,000 residents.

The victims were found "in cardio-respiratory arrest" at the facility for elderly people that was flooded after a nearby river broke its banks, governor Ikuo Kabashima from the western region of Kumamoto told reporters.

Authorities in Japan often use that term before a doctor officially certifies death.

"The Self-Defence Forces have launched rescue operations," Mr Kabashima said, adding that three others at the home were suffering from hypothermia.

Some 60 to 70 people were in the home as water rushed in to the second floor this morning, public broadcaster NHK said.

Local officials separately said another person was also found in cardio-respiratory arrest in landslides in Kumamoto. They had previously said two were feared dead.

Elsewhere in Kumamoto, one person was seriously injured and nine others were missing while about 100 people were stranded as roads were cut off by floods and landslides, NHK reported.

The nation's weather agency downgraded rain warnings by one notch from the highest emergency level in Kumamoto and nearby Kagoshima, but Prime Minister Shinzo Abe urged local people to be "on maximum alert".

Mr Abe ordered 10,000 troops on stand-by for immediate deployment to join rescue and recovery operations, pledging the central government would "do its best to take emergency measures, prioritising people's lives".

Television footage showed vehicles swamped at car parks near a flooding river, while several bridges were washed away.

"I can't evacuate as a road turned into a river. It's so scary," a female resident told NHK. 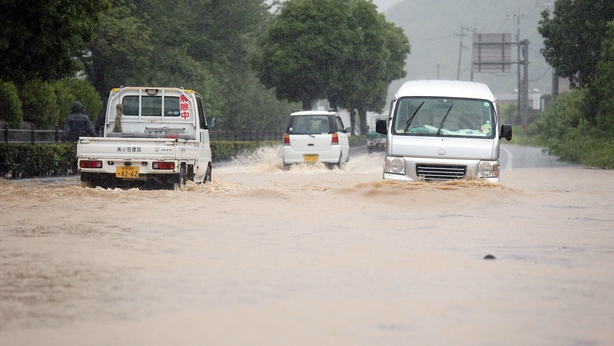 Haruka Yamada, a 32-year-old local resident, told Kyodo News: "I saw large trees and parts of houses being washed away and heard them crashing into something.

"The air is filled with the smell of leaking gas and sewage."

Aerial footage showed a resident being lifted with a rope from a roof to a military helicopter as an entire town was awash with muddy water.

"We strongly urge people to take action to protect their lives as it's still raining quite heavily," he said.

Kyodo said more than 203,000 residents in Kumamoto and Kagoshima were advised to evacuate their homes.

Some train services have been suspended in the region, while more than 8,000 households lost power.

Japan is currently in its rainy season, which often causes floods and landslides and prompts local authorities to issue evacuation orders.