Russians are set to approve constitutional reforms denounced by critics as a move to allow President Vladimir Putin to stay in the Kremlin for life.

The changes were passed weeks ago by Russia's parliament and copies of the new constitution are already on sale in bookshops, but Mr Putin pushed ahead with a nationwide vote that ends today to confer legitimacy on his plans.

The Kremlin pulled out all the stops to encourage turnout, with polls extended over nearly a week, the last day of voting declared a national holiday and prizes, including apartments and cars, on offer to voters.

Initially planned for 22 April, the vote was postponed by the coronavirus pandemic, but rescheduled after Mr Putin said the epidemic had peaked and officials began reporting lower numbers of new cases. 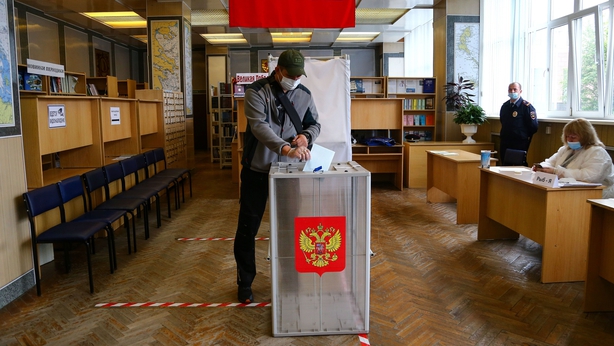 There is little doubt the reforms, which include patriotic and populist measures such as guaranteed minimum pensions and an effective ban on gay marriage, will be approved.

Mr Putin says the changes are needed to ensure stability and cement Russian values in the face of pernicious Western influences.

"We are voting for the country ... we want to pass on to our children and grandchildren," he said yesterday in a final appeal to voters.

"We can ensure stability, security, prosperity and a decent life only through development, only together and by ourselves."

Many Russians, especially those who remember the chaos and economic turmoil of the 1990s, agree. But critics say the reforms are a cover for Mr Putin to extend his rule after nearly 20 years in power.

Chief opposition campaigner Alexei Navalny said Mr Putin wants to make himself "president for life" and has called for a boycott.

US Deputy Secretary of State Stephen Biegun said on Monday that the vote was a "foregone conclusion" aimed at "the extension of (Putin's) rule for what effectively is his natural life".

Divided, weakened by years of political repression and with little access to state-controlled media, Mr Putin's opponents have failed to mount a serious "no" campaign. Restrictions on mass gatherings imposed by the coronavirus have also prevented demonstrations.

Golos, an independent election monitor, says it has received some 1,300 complaints of violations, including people voting more than once and claims employers are putting pressure on staff to cast ballots.

The Kremlin is keen to see a high voter turnout and makeshift polling stations cropped across the country, including some in buses, tents and on street benches that were ridiculed on social media.

Mr Putin's approval rating has suffered in recent months, in part over early mistakes in the government's handling of the coronavirus crisis, and stood at a historic low of 59% in one May poll.

Analysts say Mr Putin wanted to get the vote over with before Russians, already suffering from several years of falling incomes, are hit by the full economic impact of the pandemic.

Mr Putin said in a recent interview that he had not made up his mind about whether to run again and suggested part of the reason for the presidential reset was to allow Russia's political elite to focus on governing instead of "hunting for possible successors".

The other political reforms amount to a tweaking of Russia's system of government.

The president is granted some new powers including the right to nominate top judges and prosecutors, while parliament has more influence in naming senior government officials.

Russian law is given precedence over international law and top officials are banned from having foreign citizenship or residence permits.

The minimum wage cannot be below the subsistence level and state pensions must be indexed to inflation.

The reforms also enshrine "faith in God" and Russian as the national language in the constitution, define marriage as between a man and a woman and ban giving away Russian territory or questioning the country's "historical truth".