A US former policeman dubbed the "Golden State Killer" pleaded guilty to 13 murders, as well as confessing to dozens of rapes, robberies and kidnappings.

It draws a line under a sadistic crime spree that terrorised California for two decades.

Joseph James DeAngelo Jr admitted to being the notorious killer and rapist who stalked the state during the 1970s and 1980s, as the appalling details of his crimes were read out at a plea hearing held in Sacramento.

"Each time he escaped, slipping away silently into the night, leaving communities terrified," Mr Ho added.

A frail-looking DeAngelo, 74, wheeled in wearing an orange jumpsuit and a clear face shield, rasped simply "Yes," "No," "Guilty" and "I admit" to the judge's questions, as he consented to the terms of the plea deal.

Prosecutor Amy Holliday said the state was prepared to remove the death penalty and secure 11 consecutive life terms without parole for the former cop and Vietnam veteran.

DeAngelo was arrested in 2018, three decades after the "Golden State Killer" had last struck.

The manhunt finally ended after investigators successfully matched DNA evidence from crime scenes with a family genealogy database used by his relatives. 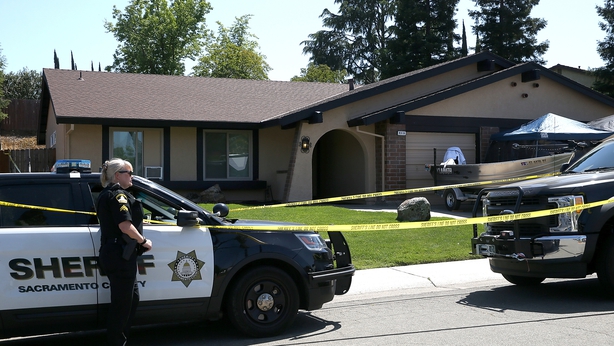 He was initially charged with only the 1978 murders of Brian and Katie Maggiore, a newlywed couple who were shot dead in Rancho Cordova, a Sacramento suburb, while walking their dog. At the time, he entered no plea.

The statute of limitations for the rapes have expired, but all offences were read out by prosecutors in a hearing that stretched over seven hours.

In one case, the judge heard how DeAngelo had forced a victim to perform a sex act by threatening to cut off the ear of her baby boy.

One prosecutor choked up as he described how murder victims' heads were bludgeoned to death with a heavy object.

The known attacks began in 1975, initially in the Sacramento area of central California, before spreading out across the state.

The spree apparently ended abruptly in 1986 with the rape and murder of an 18-year-old girl. 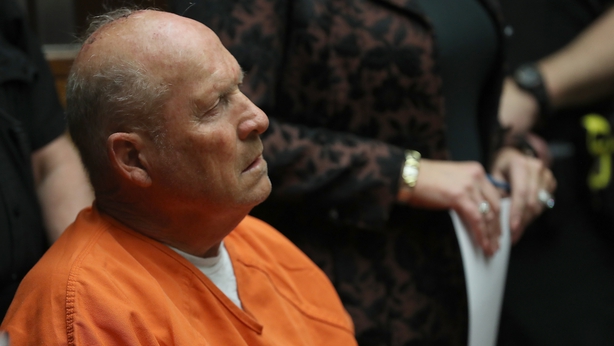 Along the way, the meticulous masked assailant was given a number of other nicknames including the East Area Rapist, the Diamond-Knot Killer and the Original Nightstalker.

In 1979, DeAngelo was fired from the police department in Auburn, California for shoplifting a hammer and a can of dog repellent.

He retired in 2017 from a job as a truck mechanic in Citrus Heights, a short commute from Sacramento, where he has lived for more than 20 years.

Its author Michelle McNamara, the wife of Hollywood actor and comedian Patton Oswalt, had died before its release.

The most important people at the #GoldenStateKiller hearing today are the survivors. All present, all staring directly at that zilch of a human being, and he can't return their gaze. That’s what I’m focusing on. https://t.co/1lqZSIyt14

"The most important people at the #GoldenStateKiller hearing today are the survivors," tweeted Mr Oswalt.

"All present, all staring directly at that zilch of a human being, and he can't return their gaze. That's what I'm focusing on."

Chants of "bye bye" and "so long" could be heard in the room as the hearing concluded, with judgment and sentencing due to begin from 17 August.

Many victims and families had passed away since the crime spree decades ago, Ms Holliday noted, and the coronavirus pandemic had threatened to further delay any trial proceedings.

Resolving the case with a deal "at this time" would allow the remaining victims and families to "hear the defendant admit that he committed these acts and crimes".

"The family members of the murder victims have waited for decades for justice for their loved ones," added Ms Holliday.

"The sexual assault victims have waited decades for justice."