A New York police officer was arrested and charged with administering an illegal chokehold, police have said.

It is the first such charge against an NYPD member since New York lawmakers passed legislation criminalising chokeholds, after recent civil unrest following the suffocation death of a black man at the hands of police in Minnesota.

David Afanador, 39, turned himself in and was charged with second-degree strangulation and first-degree attempted strangulation.

If convicted he faces up to seven years in prison.

The charges suggest authorities may believe the man, identified by the Queens District Attorney as 35-year-old Ricky Bellevue, passed out while Mr Afanador was arresting him.

Mr Afanador had been suspended without pay since Sunday, when cell phone video emerged of the officer holding his arm around a black man's neck on the boardwalk of Rockaway Beach while attempting arrest.

Mr Afanador and other officers were responding to complaints of someone yelling and screaming at bystanders, according to prosecutors.

The man briefly appeared in the video to lose consciousness.

The NYPD banned chokeholds in 1993, but their use was not eliminated and rarely punished. 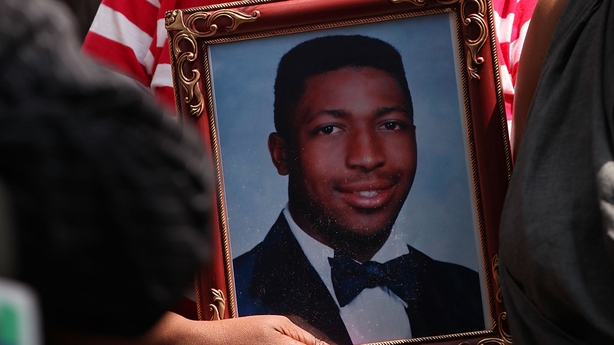 The subject has been at the forefront since 2014, when a New York officer killed an unarmed black man, Eric Garner, after placing him in a chokehold.

"The ink from the pen Gov. Cuomo used to sign this legislation was barely dry before this officer allegedly employed the very tactic the new law was designed to prohibit," said District Attorney Melinda Katz in a statement.

"The conduct alleged here cannot be tolerated. This police officer is now a defendant and is accused of using a chokehold, a maneuver we know has been lethal."

Mr Afanador has been involved in a number of excessive force complaints dating back as far as 2009, according to The New York Times, including a chokehold in 2010.

In 2014 he faced prosecution after video surfaced of him pistol-whipping a teenage suspect during a marijuana arrest.

He was acquitted following a bench trial and returned to the NYPD.