A Black Lives Matter protester who rescued an injured white man during a violent far-right rally in London over the weekend has spoken of wanting "equality for all".

Patrick Hutchinson, a personal trainer and grandfather, has been hailed as a hero after saving the man from harm during violent protests in central London on Saturday.

He formed a group with four of his friends, who are part of London-based close protection group Ark Security, to protect young Black Lives Matter protesters from getting caught up in the violence at the protests.

They took it upon themselves to be the "overseers" at the protest, to make sure those who needed help were taken safely to emergency service workers.

The group spotted a lone white man being dragged by young black protesters through a crowd and thrown on the steps near the Royal Festival Hall.

"His life was under threat so I just went and scooped him up, put him over my shoulder, and started marching towards the police with him," Mr Hutchinson told Channel 4 News.

Another member of the group, Pierre Noah, 47, a bodyguard and martial arts teacher from Croydon, described arriving outside Waterloo Station and witnessing the clashes between anti-racist and far-right protesters.

Twenty-three police officers were injured as several hundred demonstrators, mostly white men, attended the protest organised by far-right groups, which claimed they wanted to protect statues such as that of Winston Churchill from vandalism. 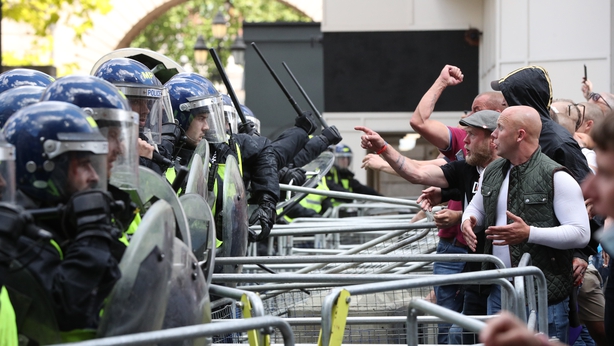 But the demonstration turned ugly after hundreds of self-proclaimed "statue defenders" took over areas near the Palace of Westminster and Trafalgar Square and hurled missiles, smoke grenades, glass bottles and flares at police officers.

Speaking to the PA news agency about rescuing the white man, Mr Noah said: "They were going to beat him up and stamp on him."

The group surrounded the man to protect him from further harm as animosity ensued among the crowds.

Mr Hutchinson carried the injured man over his shoulder while the others formed a barrier around them, before handing him to nearby police officers.

The white man did not utter a word and the group have not spoken to or seen him since.

When asked why they helped the man, Mr Noah said: "If we didn't do that I wouldn't like to think what would have happened to the poor guy.

"We wanted to save his life and save the Black Lives Matter campaign as well."

He said he wanted to save the lives of young black boys who could have been targeted by "hooligans" if anything had happened to the white man.

"We were ready to help anyone, no matter what their colour, it's for the right purpose," Mr Noah said. 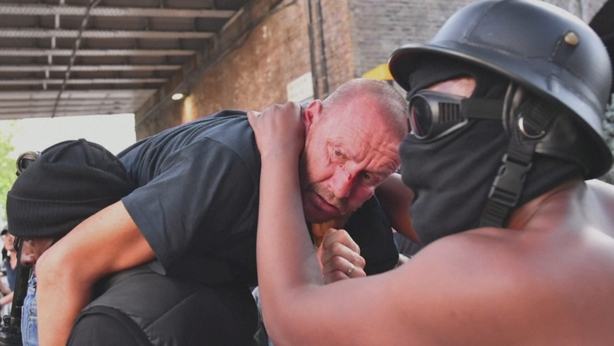 The group drew comparisons with the moment in the US when a Minneapolis police officer knelt on George Floyd's neck while other officers stood nearby and watched.

Mr Floyd died minutes later, with his death sparking protests all over the world against racism and police brutality against black people.

The group believed Mr Floyd could have been saved had the officers intervened.

Mr Hutchinson told Channel 4 News: "I just want equality for all of us.

"At the moment the scales are unfairly balanced and I just want things to be fair, for my children and my grandchildren."

Mr Noah added: "We could have easily stood there and watched those kids with their knees on that white man's head, but we chose to help."

You can watch the full interview with Patrick Hutchinson here: https://t.co/FtQoU5phJQ

A total of 113 people were arrested on Saturday during the far-right protest, which was condemned by British Prime Minister Boris Johnson as "racist thuggery" and described as "mindless hooliganism" by police.

A 28-year-old was arrested on suspicion of outraging public decency after a man was photographed apparently urinating next to the memorial dedicated to PC Keith Palmer.

The officer was stabbed to death in the 2017 terror attack in Westminster.