The United States, Britain, Australia and Canada have criticised China for imposing a new security law that they said would threaten freedom and breach a 1984 Sino-British agreement on the autonomy of the former colony.

"Hong Kong has flourished as a bastion of freedom," the four nations said, adding their "deep concern regarding Beijing's decision to impose a national security law in Hong Kong".

China's parliament approved a decision to go forward with national security legislation for Hong Kong that democracy activists in the city and Western countries fear could erode its freedoms and jeopardise its role as a global financial hub.

The UK, US, Australia and Canada said the new legislation would "curtail the Hong Kong people's liberties, and in doing so, dramatically erode Hong Kong's autonomy and the system that made it so prosperous".

"China's decision to impose the new national security law on Hong Kong lies in direct conflict with its international obligations under the principles of the legally-binding, UN-registered Sino-British Joint Declaration," they said.

"We are also extremely concerned that this action will exacerbate the existing deep divisions in Hong Kong society," they said in the joint statement.

China says the legislation will aim to tackle secession, subversion, terrorism and foreign interference in the city but the plan, unveiled in Beijing last week, triggered the first big protests in Hong Kong for months.

"We call on the Government of China to work with the Hong Kong SAR Government and the people of Hong Kong to find a mutually acceptable accommodation that will honour China's international obligations under the UN-filed Sino-British Joint Declaration," the UK-US-Canadian-Austrian statement said.

German Foreign Minister Heiko Maas said on Twitter the EU agreed Hong Kong's autonomy should not be undermined and the bloc expected the Basic Law and the "one country, two systems" principle that grants Hong Kong's citizens rights and freedoms to be respected.

China's National People's Congress voted 2,878 to one in favour of the decision to empower its standing committee to draft the legislation, with six abstentions.

The legislators gathered in the Great Hall of the People burst into sustained applause when the vote tally was projected onto screens.

Police fired pepper pellets and made 360 arrests yesterday as thousands took to the streets in anger over the anthem bill and national security legislation proposed by China that has raised international alarm over freedoms in the city.

The new security law could see Chinese intelligence agencies set up bases in the city that was given a high degree of autonomy under the "one country, two systems" terms of its 1997 handover to China by former colonial power Britain.

At the Hong Kong's Legislative Council, where politicians were debating a bill that would criminalise disrespect of China's national anthem. opposition MP Ted Hui ran into the hall carrying a plastic bottle with what he said was rotten plants, which he dropped onto the floor, causing a bad smell that forced everyone to leave. 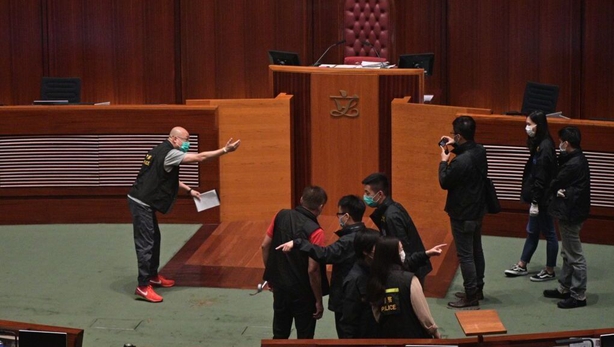 Firemen were called to inspect it.

Chinese authorities and the Beijing-backed government in Hong Kong say there is no threat to the city's high degree of autonomy and the new security law would be tightly focused.

The United States and China clashed over Hong Kong at the United Nations yesterday after China opposed a request by the US for the Security Council to meet over the national security legislation.

The US mission said it was "a matter of urgent global concern that implicates international peace and security". China said the legislation was an internal matter.

US President Donald Trump has promised an announcement on what action he will take over Hong Kong at the end of the week. More than 1,300 US companies have offices in the city, providing around 100,000 jobs.

Protesters and pro-democracy politicians say Hong Kong's National Anthem Bill, which aims to govern the use and playing of the Chinese national anthem, represents another sign of what they see as accelerating interference from Beijing.

The anthem bill is expected to become law next month.