President Donald Trump has demanded that US state governors allow places of worship to reopen immediately, as the country moves gradually towards a lifting of Covid-19 lockdown measures.

"Today I am identifying houses of worship - churches, synagogues and mosques - as essential places that provide essential services," he told a news conference at the White House.

"The governors need to do the right thing and allow these very important essential places of faith to open right now, for this weekend.

"If they don't do it, I will override the governors. In America, we need more prayer, not less."

Establishing what constitutes essential services has been a prerogative of state and local officials, rather than the federal government, and many have restricted houses of worship from holding group services to slow the spread of the coronavirus.

In some areas, churches have opened under strict social distancing rules, while in others, pastors and priests have held services outdoors, with worshippers staying in their cars.

But Mr Trump said houses of worship should be allowed to open just like other places that were designated essential services - including drug stores, restaurants, supermarkets, hospitals and health clinics, as well as stores that sell alcohol. 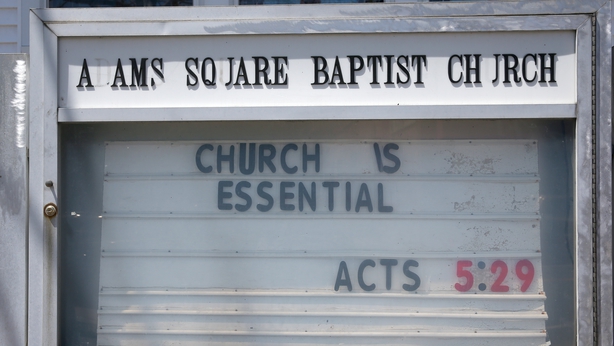 "Some governors have deemed liquor stores and abortion clinics as essential but have left out churches and other houses of worship. It's not right," the US president said.

Earlier today Mr Trump announced he plans to withdraw the United States from the Open Skies Treaty with Russia.

It is the third arms control pact Mr Trump has withdrawn the US from since coming to office.

The US leader said Russia had not stuck to its commitments under the 18-year-old pact, which was designed to improve military transparency and confidence between the superpowers.

"Russia did not adhere to the treaty," he told reporters at the White House, adding that "until they adhere, we will pull out."

The New York Times reported that Mr Trump plans to inform Russia of the move tomorrow, and that it could be a prelude to the US also withdrawing from the New START Treaty, which limits the number of nuclear missiles the United States and Russia can deploy.

The Open Skies agreement between Russia, the United States and 32 other countries, mostly members of the NATO alliance, permits one country's military to conduct a certain number of surveillance flights over another each year on short notice.

The aircraft can survey the territory below, collecting information and pictures of military installations and activities.

The idea is that the more rival militaries know about each other, the less the chance of conflict between them.