An Italian woman has won a Picasso painting worth €1m in a charity raffle to raise money for village water projects in Africa.

The winner of yesterday's draw at Christie's auction house in Paris was named as Claudia Borgogno, who was gifted the winning ticket.

Her prize is Picasso's 1921 oil painting "Nature Morte" (Still Life), which is signed and dated by the artist.

The Spanish master's geometric composition representing a piece of newspaper and a glass of absinthe had been valued at €1m.

The "1 Picasso for 100 euros" project organised by French charity Aider les Autres (Help the Others) aims to raise funds for various humanitarian projects.

This year's draw, the second with a Picasso prize, was to raise funds for the poverty-fighting agency CARE to finance projects improving access to water for 200,000 villagers in Morocco, Cameroon and Madagascar.

Tickets were bought by people in more than 100 countries, with the majority in France, the United States and Switzerland. 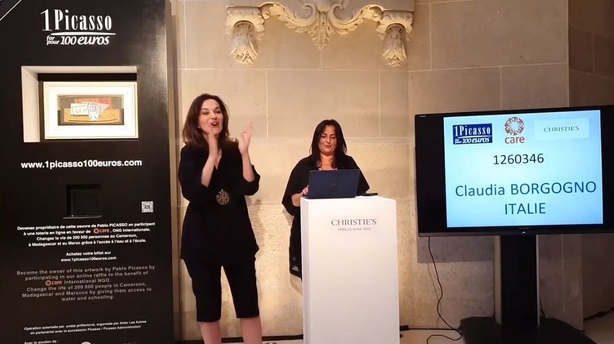 "We had to reassure that it was a real operation with a real Picasso, it seemed too good to be true."

She welcomed that people had realised "water is crucial for health" during the coronavirus pandemic, which had delayed the draw that was originally due to take place in March.

"It is all the more important as one in three people on Earth does not have access to drinking water," she said.

The painting's owner, billionaire art collector David Nahmad, will be paid €900,000 and the remaining €4.2m will finance the CARE projects.

The first "1 Picasso for 100 euros" raffle in 2013 raised funds to benefit a project in the ancient Lebanese city of Tyre, a UNESCO World Heritage site.