Syria's war-ravaged northwest woke up to relative calm, its skies free of warplanes for the first day in months, following a Russian-Turkish ceasefire deal.

The agreement raised hopes of an end to one of the bloodiest phases in the nine-year conflict but residents in Idlib were sceptical this deal would last longer than previous ones.

The Syrian Observatory for Human Rights monitoring group and AFP correspondents in Idlib province said the truce appeared to be holding after coming into force at midnight.

Rami Abdel Rahman, chief of the British-based Observatory, reported "a complete absence of regime and Russian warplanes in the Idlib airspace".

He said an exchange of fire before dawn killed six regime fighters and nine members of the Turkistan Islamic Party, a Uighur-dominated jihadist group, but in general belligerents seemed to be observing the ceasefire.
Syrian state news agency SANA also reported calm in the region.

The agreement will create a security corridor along the key M4 highway in northern Syria, where Turkish and Russian forces will launch joint patrols later this month.

A Russian-backed government offensive on the last rebel bastion in the country has killed hundreds of civilians since December and displaced close to a million people.

Syiran President Bashar al-Assad told Putin in a phone call late Friday he was "satisfied" with the deal, the Syrian presidency said.

Mr Putin told reporters after the talks that the agreement would "serve as a good basis for ending fighting" in Idlib and for "stopping the suffering of the civilian population". 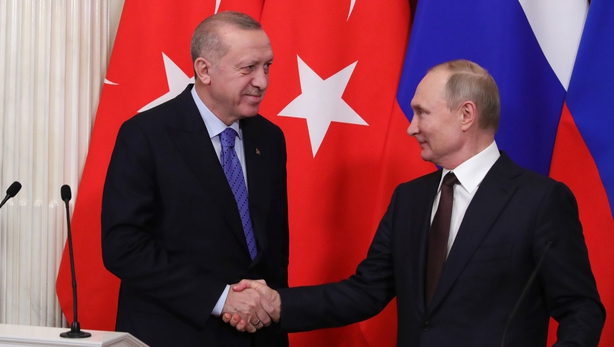 Mr Erdogan said 12 Turkish monitoring posts set up around the Idlib region under a previous deal in 2018 would remain.

"We will be on alert for any violation or attack by the regime," the Hurriyet newspaper reported him as saying.

European and UN officials welcomed the Moscow deal and said they hoped to see a lasting cessation of hostilities, but residents of the conflict-torn region had low expectations.

Ahmad Qaddour, a 29-year-old who lives in a displacement camp with his wife and two children, said he had learned to always expect the worst.

"We do not have any confidence in the regime and Russia regarding this ceasefire," he said.

The UN Security Council tried to adopt a statement supporting the truce, but the United States blocked the text requested by Russia, saying it was "premature", diplomats said.

The United Nations has described the mass displacement in just three months as the worst humanitarian emergency since the start of the war in 2011.

Tensions had risen in recent weeks between Damascus and Turkey, which has had troops in northern Syria since 2016 and backs some of the rebel groups.

The joint Russian-Turkish patrols will operate between the village of Tronba in Idlib and a village in Latakia province, a regime stronghold.

The M4 highway runs roughly parallel to Syria's northern border with Turkey, from northeastern Kurdish-controlled regions to the Mediterranean coast.

The segment affected by the deal reached in Moscow lies mostly in Idlib province and marks the rough border of a buffer zone Turkey would like to create inside Syria.

Damascus has always insisted it wants to reclaim all land it lost to rebels early on in the war, a position Moscow supports.

Turkey however wants to maintain its influence in northern Syria by deploying its forces and proxies in a buffer zone about 30 kilometres deep along the entire border.

The patrols agreed to on Thursday in Moscow will be the first time Russian and Turkish forces operate jointly in Idlib and are due to start on March 15.

On that day, the conflict that has killed more than 380,000 people and displaced millions will enter its 10th year.

Turkey already hosts 3.6 million Syrian refugees, more than any other country, and is reluctant to let more in.

A move to open its borders with Greece to refugees seeking to flee to the European Union has drawn accusations that Ankara was resorting to the most cynical form of blackmail.

The rush to EU borders witnessed in recent days has sent Brussels into a panic, with EU member states promptly offering Turkey millions in aid to help it cope with the burden of refugees.