Somalia has declared a locust infestation sweeping the Horn of Africa to be a national emergency, as insects devastate food supplies in one of the poorest and most vulnerable regions in the world.

"The Ministry of Agriculture... has declared a national emergency in view of the current desert locust upsurge, that poses a major threat to Somalia's fragile food security situation," the ministry statement read.

Experts say the locust swarms are the result of extreme weather swings, and Somalia's declaration - the first country in the region to do so - is aimed at boosting national efforts in tackling the hungry insects.

The locusts - part of the grasshopper family - have led to what the Food and Agriculture Organization (FAO) has termed the "worst situation in 25 years" in the Horn of Africa.

"Food sources for people and their livestock are at risk," the agriculture ministry added.

"The desert locust swarms are uncommonly large and consume huge amounts of crops and forage."

The emergency declaration was made to focus efforts and raise funds, because it was critical to contain the locust swarms before harvests are due in April, the ministry said.

Desert locusts - whose destructive infestations cause major crop damage and hunger - are a species of grasshopper that live largely solitary lives until a combination of conditions promote breeding and lead them to form massive swarms. According to the regional Food Security and Nutrition Working Group, East Africa is already experiencing a high degree of food insecurity, with over 19 million people facing acute hunger.

Swarms formed in eastern Ethiopia and northern Somalia and have moved through the region.

The FAO says the current invasion is known as an "upsurge" - when an entire region is affected - however, if it gets worse and cannot be contained, over a year or more, it would become what is known as a "plague" of locusts. 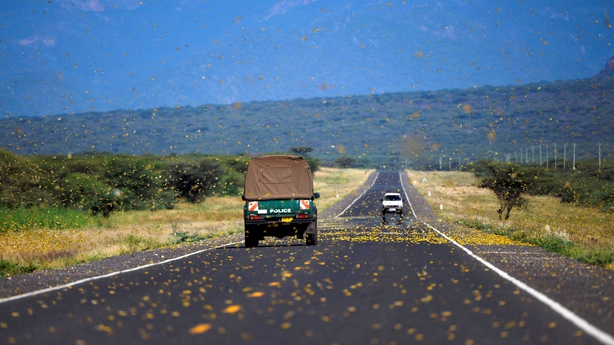