BBC boss Tony Hall has told staff he will step down in six months' time, as the British broadcaster grapples with a damaging equal-pay ruling and scrutiny over funding.

"I will give my all to this organisation for the next six months... but in the summer I'll step down as your Director-General," he told staff in a group email.

"If I followed my heart I would genuinely never want to leave. However, I believe that an important part of leadership is putting the interests of the organisation first."

Mr Hall took up his post in 2013, tasked with restoring the reputation of the world's biggest broadcaster after presenter Jimmy Savile was exposed as one of Britain's most prolific child-sex offenders following his death.

However the corporation now faces the fallout of an equal-pay ruling in which an employment tribunal ruled it discriminated against female presenter Samira Ahmed, paying her one sixth of the amount given to Jeremy Vine for hosting a similar show.

The ruling opens the door to many other claims and could end up costing the corporation many millions of pounds.

The BBC is also facing pressure from Britain's new government, headed by Prime Minister Boris Johnson, which accuses it of bias in reporting in the recent general election.

Mr Hall rebuffed the claims in his parting email, saying: "In an era of fake news, we remain the gold standard of impartiality and truth." 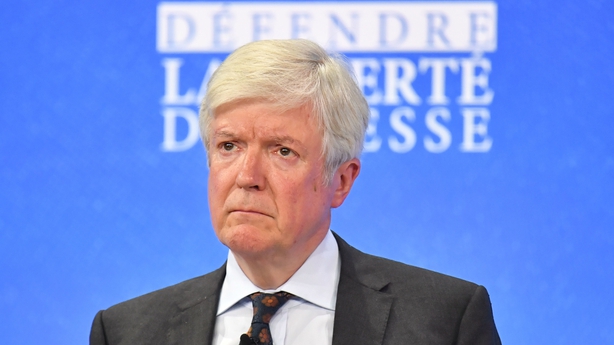 The government has previously committed to maintain the licence fee model until 2027. A standard licence costs each British household just over £154 (€182) a year.

In the last financial year to April 30, the BBC received £3.7 billion in funding from the licence fee - an enviable revenue stream in tough economic times for media companies.

The prime minister has said that "you have to ask yourself whether that kind of approach to funding a TV media organisation still makes sense".

"How long can you justify a system whereby everybody who has a TV has to pay to fund a particular set of TV and radio channels," he asked, highlighting the challenge for the incoming boss.

Chairman of the BBC David Clementi called Mr Hall "an inspirational creative leader, within the UK and around the globe".

"Tony has led the BBC with integrity and a passion for our values that is obvious to everyone who meets him," he said.

Mr Hall, 68, is a former head of BBC news but spent more than a decade as chief executive of the Royal Opera House before returning to the broadcaster as director general.

The BBC said it would begin searching for a successor "within the next few weeks."