Russian President Vladimir Putin has met his Syrian counterpart Bashar al-Assad during a surprise visit to Damascus as the prospect of conflict between Iran and the United States looms over the region.

The US killed top Iranian commander Qassem Soleimani last week, triggering vows of bloody revenge from Iran and its allies.

On his first visit to Damascus since the start of the Syrian conflict nearly nine years ago, President Putin greeted the Russian forces stationed there to mark the Orthodox Christmas.

Russia's 2015 military intervention was decisive in saving President Assad's regime and Mr Putin hailed the latest advances made by Syrian government forces during his visit.

"In his conversation with Assad, Putin noted that we can now say with confidence that a huge distance has been travelled towards restoring Syrian statehood and the country's territorial integrity," Russian news agencies quoted Kremlin spokesman Dmitry Peskov as saying.

Government and allied forces barely controlled a fifth of the country before Moscow stepped in, but have now clawed back most of the territory lost at the beginning of the war.

Russia has thousands of forces deployed across Syria in support of the army, while an unknown number of Russian private security personnel also operate on the ground.

In December 2017, Mr Putin visited Hmeimim, the Mediterranean base where the largest number of Russian forces is deployed, but had not visited Damascus since the start of the conflict in 2011.

Mr Peskov told the Interfax, RIA Novosti and TASS news agencies that Mr Putin had met Mr Assad at a command post for Russian forces in Syria, driving through Damascus on the way.

"Putin also noted that on the streets of Damascus the signs of how peace has been restored can be seen with the naked eye," Mr Peskov added.

He said the two men had heard military reports on the situation in various parts of Syria.

"The Syrian president expressed appreciation for the help of Russia and the Russian military in the fight against terrorism and the restoration of peaceful life in Syria," Mr Peskov said.

President Assad's forces now control more than 70% of the country, but several areas remain out of their control.

These include the embattled opposition bastion of Idlib, a northern area seized by Turkey last year, and a Kurdish-controlled swath of the northeast.

The Syrian presidency said Mr Assad and Mr Putin discussed stamping out "terrorism" in jihadist-held Idlib, and Turkey's "measures" in the north of the country.

President Putin appears not to have been received at the presidential palace, but the two leaders visited the Umayyad mosque, according to photos shared by the presidency.

To mark Christmas, they also visited the centuries-old Mariamite Cathedral in Damascus - the seat of the Greek Orthodox church in the East - where the Russian leader presented the gift of an icon of the Virgin Mary, the presidency said. 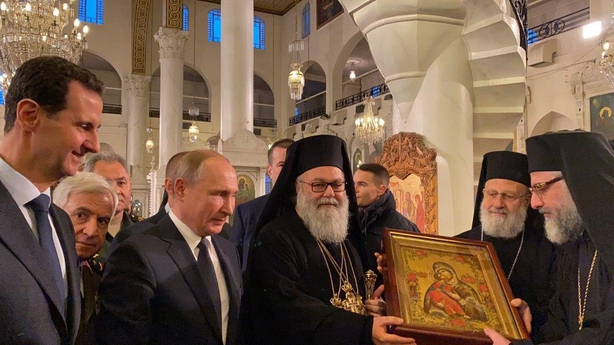 Mr Putin is expected to travel to Turkey next, the other key broker in a conflict that has left more than 380,000 people dead and displaced half the country's population.

His visit to the region comes as the United States military dominance there wanes while Russia's grows.

General Soleimani, the head of Iran's Islamic Revolutionary Guard foreign operations arm, was killed on Friday in a US strike on Baghdad international airport.

He was widely seen as one of the most powerful men in the region and the architect of Iran's support for the Syrian army.

Iran has reacted by vowing bloody revenge, as have the militias it controls in Iraq, while parliament in Baghdad has voted to request a full US troop withdrawal.

US President Donald Trump, who boasted in a tweet that General Soleimani should have been killed earlier, in turn threatened Iran with more strikes and Iraq with sanctions if US forces were targeted or forced to leave.

President Putin's reaction to the escalation between Iran and Washington had been brief, warning only that Qasem Soleimani's killing could "seriously aggravate the situation in the region".

The US still has forces deployed in Syria as part of the coalition against the Islamic State group, some in Kurdish-controlled areas in the northeast and others at a base further south near the Iraqi and Jordanian borders.