The United States has no plans to pull out militarily from Iraq, US Defence Secretary Mark Esper told Pentagon reporters this evening, following reports of a US military letter detailing a withdrawal.

"There's been no decision whatsoever to leave Iraq," Mr Esper said, when asked about the letter, adding there had also been no plans issued to prepare to leave.

"I don't know what that letter is ... We're trying to find out where that's coming from, what that is. But there's been no decision made to leave Iraq. Period."

Mr Esper added the United States was still committed to countering Islamic State in Iraq, alongside America's allies and partners.

Earlier this evening, it had been reported that the US military had informed its counterparts in Baghdad it was preparing for "movement out of Iraq," a day after the Iraqi parliament urged the government to oust foreign troops.

The head of the US military's Task Force Iraq, Brigadier General William Seely, reportedly sent a letter to the head of Iraq's joint operations command, a copy of which was seen by AFP.

The letter said forces from the US-led coalition in Iraq would "be repositioning forces over the course of the coming days and weeks to prepare for onward movement".

"In order to conduct this task, Coalition Forces are required to take certain measures to ensure that the movement out of Iraq is conducted in a safe and efficient manner," said the letter, dated today.

#IRAQ: Letter says helicopters would be travelling in and around the Green Zone as part of preparations to "move out"@AFP can hear helicopters flying low over Baghdad for the past three hours

As the letter was signed by a US official, it was not immediately clear whether it applied to forces from the 76 countries which make up the international coalition.

However, Mr Esper later said the US has no plans to pull out of Iraq.

The Pentagon Joint Chiefs Chairman, Mark Milley, has said the letter was "genuine" but was not intended to be sent at this time.

"This was a mistake from McKenzie," Mr Milley told reporters, referring to US Central Command commander General Frank McKenzie.

"It shouldn't have been sent," he added. 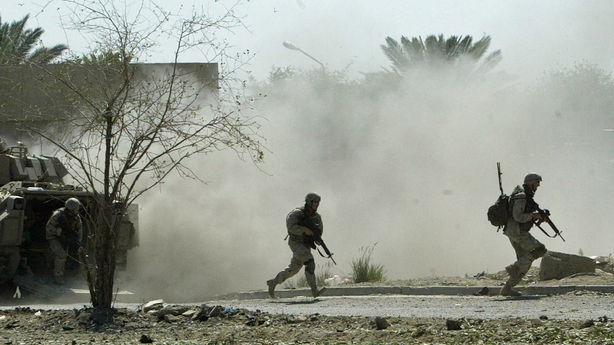 Some 5,200 US soldiers are stationed across Iraqi bases to support local troops preventing a resurgence of the so-called Islamic State group.

They make up the bulk of the broader coalition, invited by the Iraqi government in 2014 to help combat the jihadists.

Yesterday, Iraq's parliament voted in favour of rescinding that invitation and ousting all foreign troops.

It came in reaction to a US precision drone strike on Baghdad that killed Iranian general Qasem Soleimani and top Iraqi commander Abu Mahdi al-Muhandis, among others.

Iraqi premier Adel Abdel Mahdi met with the US Ambassador Matthew Tueller today, telling him it was "necessary to work together to withdraw foreign forces from Iraq".