Pope Francis has led the world's 1.3 billion Catholics into Christmas, urging them not to let the church's failings lead them away from accepting God's love.

Francis celebrated a solemn Christmas Eve mass in St Peter's Basilica for thousands of people as hundreds of others watched on large screens outside.

As is customary on Christmas Eve, the 83-year-old pope weaved his sermon around the spiritual and personal significance of the night that Jesus was born in Bethlehem.

"Christmas reminds us that God continues to love us all, even the worst of us," Francis, presiding at the seventh Christmas season of his pontificate, said in his sermon.

"You may have mistaken ideas, you may have made a complete mess of things, but the Lord continues to love you. How often do we think that God is good if we are good and punishes us if we are bad. Yet that is not how he is."

Without mentioning them specifically, Francis also referred to recent church troubles, including its attempts to come to grips with continuing sexual abuse scandals around the world and financial irregularities closer to home at the Vatican.

"Let us contemplate the child and let ourselves be caught up in his tender love. Then we have no further excuse for not letting ourselves be loved by him," Francis said. 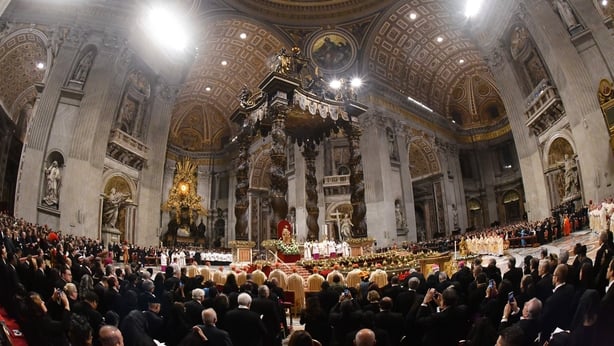 "Whatever goes wrong in our lives, whatever doesn't work in the church, whatever problems there are in the world, will no longer serve as an excuse.

"It will become secondary, for faced with Jesus' extravagant love, a love of utter meekness and closeness, we have no excuse," he said.

In his latest attempt to confront a sexual abuse scandal, Francis last week announced sweeping changes to the way the church deals with them, abolishing the rule of "pontifical secrecy" that previously covered them.

Advocates for the victims of a scandal that has rocked the church for nearly two decades applauded the move.

On Christmas Day, Francis will deliver his twice-yearly "Urbi et Orbi" (to the city and the world) message and blessing from the central balcony of St Peter's Basilica to thousands of people in the square below.

Unlike that on Christmas Eve, the Christmas day message is typically more about the significance of the Christmas message amidst the wars and conflicts of contemporary society.