A 51-year-old man has been arrested by British police on suspicion of murder after a 12-year-old boy was killed in a "deliberate" hit-and-run crash outside an Essex school.

Essex Police said in a statement the man has also been arrested on six counts of attempted murder and one of causing death by dangerous driving.

He also faces charges including causing serious injury by driving, failing to stop at the scene of a collision and driving without insurance.

The arrest came after police earlier said they were searching for a Loughton man over the incident.

Four teenagers thought to be pupils at Debden Park High School in Loughton and a 23-year-old woman were also injured when the car ploughed into them.

Officers had begun a manhunt as they tried to trace a silver Ford Ka, which is believed to have been damaged in the crash in Willingale Road.

Head teacher Helen Gascoyne said the school had been "devastated" by the death of one of its students and that pupils would be offered counselling.

Chief Superintendent Tracey Harman told reporters last night: "We believe that the collision was deliberate and as such we have launched a murder investigation.

"We are investigating whether or not this incident may have been connected with another incident nearby." 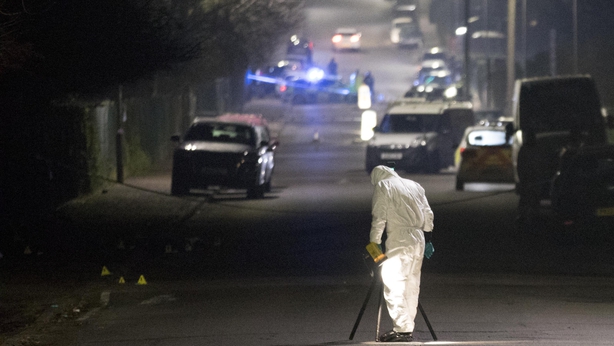 Earlier, Ms Harman said searches had been carried out to try to locate the driver, as she appealed directly to him to come forward.

Police were called to the scene shortly after the end of the school day, at around 3.20pm.

A 12-year-old boy was taken to hospital where he died.

Essex Police said they were treated at the scene or in hospital, and their injuries were not believed to be life-changing or life-threatening.

Detective Chief Inspector Rob Kirby said: "This has been a truly shocking incident and my deepest sympathies are with all those involved.

"I would like to thank the many members of the public who have called us with information and spoken to our officers, as well as those who provided crucial medical assistance at the scene."