Spanish police have charged against Catalan pro-independence protesters at the entrance to the Barcelona international airport.

Video footage showed police using batons on some of the demonstrators, some of them masked and hooded, who pushed and shoved in return. There were some arrests.

Thousands of people were gathered outside and dozens were in one of the access halls to the airport.

The airport authority said at least 20 flights had been cancelled due to the protests.

Crowds have also taken to the streets of the city after the Catalan separatist leaders were sentenced to between nine and 13 years in jail for sedition over the failed 2017 independence bid.

As the news broke, demonstrators turned out en masse, blocking streets in Barcelona and elsewhere as police braced for what activists said would be a mass response of civil disobedience.

The long-awaited ruling capped weeks of rising tension, and puts the Catalan question at the heart of the political debate less than a month before Spain heads into its fourth general election in as many years.

Ahead of the ruling, Barcelona had woken up to a heavy police presence, with forces noticeably visible around the regional high court, the main Sants train station and El Prat, Spain's second busiest airport.

The 12 defendants were put on trial in February for their role in the banned October 2017 referendum and the short-lived independence declaration that followed it.

The harshest sentence of 13 years was handed to former Catalan vice president Oriol Junqueras who served as the main defendant in absence of Carles Puigdemont, the region's leader who fled Spain to avoid prosecution.

Soon after the sentences were handed down a Spanish judge issued a new international warrant for the arrest of Mr Puigdemont.

The warrant calls for his detention on grounds of sedition and misuse of public funds.

In a tweet from Brussels, Mr Puigdemont denounced the sentences as an "outrage".

"100 years in all. An outrage. Now more than ever, by your side and those of your families. It is time to react as never before," he wrote.

In a letter to his supporters Mr Junqueras said the story was far from over.

"Nothing ends today, you neither win nor convince," he wrote in remarks directed at Spain's central government.

"We will come back even stronger... and win."

Spain's government has expressed hope that the trial's end would allow it to move on from the crisis in the wealthy northeastern region, where support for independence had been gaining momentum over the past decade.

"Following the Supreme Court decision we need to turn the page based on peaceful co-existence in Catalonia through dialogue," Spanish Prime Minister Pedro Sanchez said.

However Mr Junqueras' leftwing ERC party has said dialogue would not be possible without an "amnesty" for "political prisoners and those in exile".

Barcelona Football Club also tweeted its own response to the ruling, saying: "Prison is not the solution.

FC Barcelona announcement
"Prison is not the solution" pic.twitter.com/o0BWOaThgD

"The resolution of the conflict in Catalonia must come exclusively from political dialogue."

The separatist movement is hoping the guilty verdicts will unite their divided ranks and bring supporters onto the streets.

"It is time to rise up against the authoritarian fascism of the Spanish state and its accomplices," tweeted the radical CDR, whose activists briefly blocked Barcelona's Sants station on Sunday and cut traffic on one of its main streets.

"It is time for the #PopularRevolt."

In the coming days, demonstrators will march from five towns towards Barcelona where they will congregate on Friday, when a general strike has been called.

For many, the situation has brought back memories of tensions in the street in the run-up to the October, 2017 referendum which was marred by police violence, and ahead of the short-lived independence declaration that followed on 27 October.

Two influential Catalan civic leaders, Jordi Sanchez and Jordi Cuixart, were sentenced to nine years in prison, while the remaining three leaders escaped jail time and were each handed a fine of around €60,000. 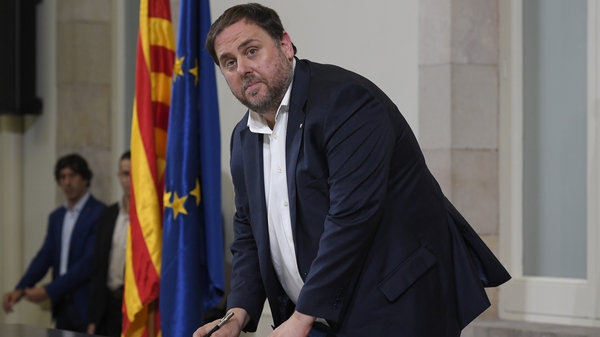