Masked pro-democracy protesters have marched through Hong Kong in defiance of a ban on face coverings as much of the city ground to a halt.

Subway services have been suspended and many shops shuttered following another night of violence.

The United Nations has expressed concern over the increasingly violent pro-democracy protests.

UN Human Rights chief Michelle Bachelet said the situation was troubling and stressed any measures to stop them must be grounded in law.

Thousands of protesters staged unsanctioned marches and flashmob protests at multiple locations, a day after the city's leader, Carrie Lam, outlawed face coverings at protests, invoking colonial-era emergency powers not used for half a century.

As the crowds began marching, Ms Lam released a stony-faced video statement in which she condemned protesters for "a very dark night". 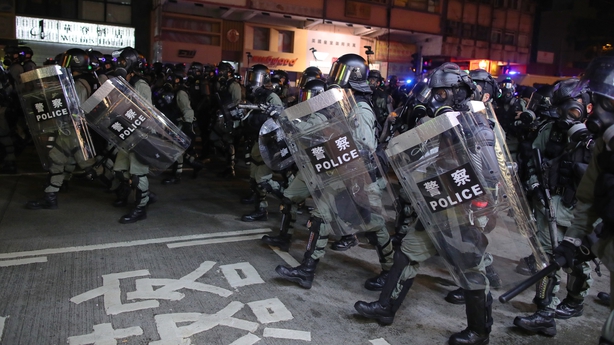 "We cannot allow rioters any more to destroy our treasured Hong Kong," Ms Lam said as she called on citizens to distance themselves from the more hardcore protesters.

Throughout the afternoon and evening crowds gathered in masks, most of them moderates without the helmets and body armour worn by more radical protesters.

"The anti-face mask law is the first step," Hosun Lee, a protester in Causeway Bay, told AFP, saying he feared more laws under the emergency order were on the way.

Some gatherings were light-hearted. In the harbourside district of Tsim Sha Tsui, a masked man walked dressed in a banana costume, the word "Revolt" emblazoned on its front.

But in Sheung Shui, close to the Chinese border, AFP reporters saw groups of masked protesters smashing the windows of businesses either owned by mainland Chinese entities or thought to be supportive of Beijing.

Police officers - many of whom had their faces covered and were not wearing identification numbers - were seen tackling a young couple wearing masks in the district of Central.

Crowds shouted "triads" at the police and the couple were eventually released. But another masked man was handcuffed and led away soon after. 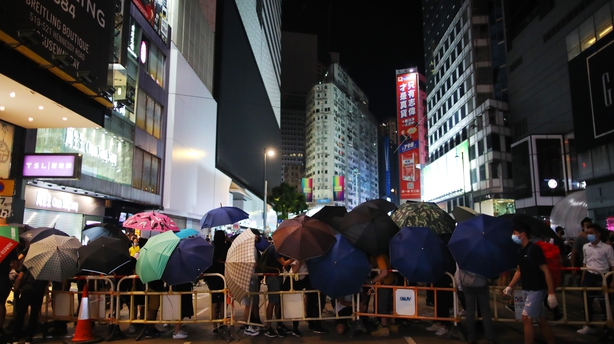 Hong Kong has been battered by four months of increasingly violent pro-democracy protests.

The rallies were ignited by a now-scrapped plan to allow extraditions to the mainland, which fuelled fears of an erosion of liberties promised under the 50-year "one country, two systems" model China agreed ahead of the 1997 handover by Britain.

After Chinese authorities and local leaders took a hard line, the demonstrations snowballed into a wider movement calling for more democratic freedoms and police accountability.

Ms Lam has refused major concessions but struggled to come up with any political solution, leaving police and demonstrators to fight increasingly violent battles as the city tips into recession.

Hong Kong witnessed its worst clashes to date on Tuesday as China celebrated 70 years of Communist Party rule, with a teenager shot and wounded by police as he attacked an officer.

Yesterday Ms Lam used a colonial-era law to ban face masks at protests, triggering another wave of mass protests and vows of defiance.

In the northern district of Yuen Long, a plainclothes police officer opened fire when he was surrounded in his car and attacked by protesters, a petrol bomb exploding at his feet.

Police haveconfirmed a 14-year-old boy was shot in the leg, taken to hospital and then arrested on suspicion of assaulting an officer and rioting.