One of the officials said the attacks originated in Iran's southwest.

Three officials, speaking to Reuters on condition of anonymity, said the attack involved both cruise missiles and drones, indicating the strike had a higher degree of complexity and sophistication than initially thought.

The officials did not provide evidence or detail the US intelligence they used to make the assessments.

Such US intelligence, if shared publicly, could add to pressure for a response by the United States, Saudi Arabia and others.

One of the three officials who spoke about the delivery systems for the strike expressed confidence that Saudi Arabia's collection of materials following the strike would yield "compelling forensic evidence ... that will point to where this attack came from." 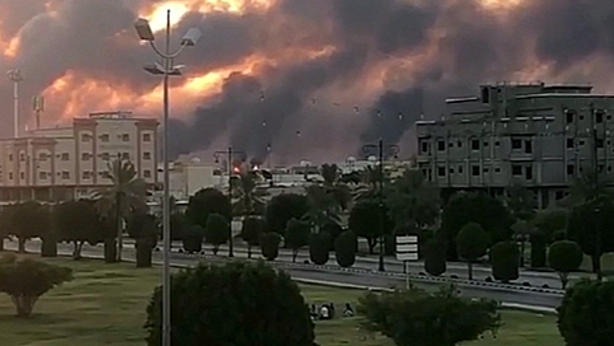 A US team is helping Saudi Arabia evaluate evidence from the attack, which was claimed by Houthi rebels in Yemen who are battling a Saudi-led coalition.

US officials said they do not believe Houthi claims that the Yemen-based fighters carried out the latest attack.

Iran denies any role in the strike on the world's biggest crude oil processing plant, which knocked out half of Saudi Arabia's oil production.

Bruce Riedel, a former CIA analyst and expert on the Middle East, said the United States has an uphill battle convincing allies.

Mr Trump himself has at times criticised his own intelligence community, and the United States lost credibility by justifying its 2003 invasion of Iraq on false claims that Baghdad had weapons of mass destruction.

"The burden of proof is on the administration to prove that the Houthis claims are inaccurate; the Houthis clearly had motive," Mr Riedel said.

"Given the history of the administration's trashing its own intelligence community why should we believe them now?"

In a sign that US allies remain unconvinced, French Foreign Minister Jean-Yves Le Drian said he was unsure if anyone had any evidence to say whether drones "came from one place or another."

Relations between the United States and Iran have deteriorated since Mr Trump pulled out of the Iran nuclear accord last year and reimposed sanctions on its oil exports.

For months, Iranian officials issued veiled threats, saying that if Iran were blocked from exporting oil, other countries would not be able to do so either.

However, Iran has denied any role in a series of attacks in recent months, including bombings of tankers in the Gulf and strikes claimed by the Houthis.

US Vice President Mike Pence said the United States was reviewing evidence that suggests Iran was behind the attacks on Saudi oil facilities and stands ready to defend its interests and allies in the Middle East.

"We're evaluating all the evidence. We’re consulting with our allies. And the president will determine the best course of action in the days ahead," Mr Pence said, adding that Secretary of State Mike Pompeo was traveling to Saudi Arabia.

Oil prices dropped sharply today, following a surge yesterday that at one point saw prices up by 20%.

The drop comes after a leading Saudi source said that production could be fully back on line within weeks.

This is quicker than initially thought following weekend attacks that halved the kingdom's output.

The attacks had raised the spectre of a major supply shock in a market that in recent months has been preoccupied with demand concerns and faltering global growth.

Production could be fully online within two to three weeks and the kingdom was close to restoring 70% of the 5.7 million barrels a day lost after the attacks, a top Saudi source briefed on the latest developments told Reuters.