The strikes sparked fires at the state-owned Aramco oil plants.

Huge palls of smoke rose into the sky after the pre-dawn attacks yesterday on Abqaiq and Khurais, two key Aramco facilities in eastern Saudi Arabia as the giant prepares for a much-anticipated stock listing.

The drones triggered multiple explosions, forcing state-owned Aramco to temporarily suspend production at the two facilities, interrupting about half of the company's total output. 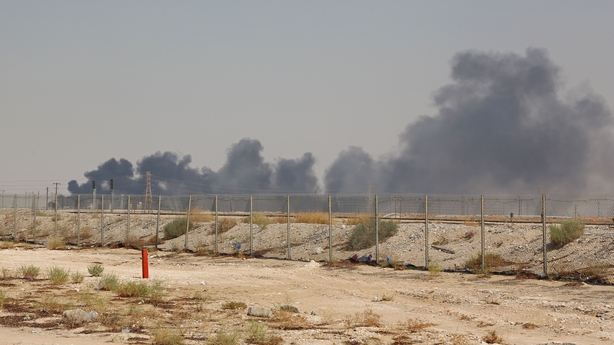 However US Secretary of State Mike Pompeo blamed Tehran for the attack, saying there was no evidence it was launched from Yemen.

"The United States will work with our partners and allies to ensure that energy markets remain well supplied and Iran is held accountable for its aggression," he added.

Iran's foreign ministry dismissed as "meaningless" US accusations it was behind the drone attacks, suggesting they were a pretext to retaliate against the Islamic republic.

"Such fruitless and blind accusations and remarks are incomprehensible and meaningless," a ministry spokesman was quoted as saying in a statement.

The allegations over yesterday's strikes were meant to justify "future actions" against Iran, he added.

Following a phone call between US President Donald Trump and Saudi Crown Prince Mohammed bin Salman, the White House condemned the attacks on "infrastructure vital to the global economy".

Prince Mohammed had earlier issued a statement saying the kingdom was "willing and able" to respond to this "terrorist aggression", according to Saudi state media.

There were no casualties in the attack but the full extent of the damage was not immediately clear as reporters were not allowed near the plants where Saudi authorities swiftly stepped up security.

The attacks on the Abqaiq plant - Aramco's largest oil processing facility - and nearby Khurais, which hosts a massive oil field "resulted in production suspension of 5.7 million barrels of crude oil per day", the company said.

Aramco CEO Amin Nasser said work was under way to restore production and a progress update would be provided in the next two days.

Explosions at the plant also led to a production halt of an estimated two billion cubic feet of gas per day.

In recent months, Houthi rebels have carried out a spate of cross-border missile and drone attacks targeting Saudi air bases and other facilities in what they say is retaliation for a long-running Riyadh-led bombing campaign on rebel-held areas in Yemen.