Forecasters said it was likely to become a hurricane before the end of the weekend.

The storm is expected to leave the northwestern Bahamas later today and then will move well offshore of the east coast of Florida and into the Atlantic Ocean through early next week, according to the US National Hurricane Center.

Humberto had maximum sustained winds near 65km/h with higher gusts, and was expected to become a hurricane by tomorrow night, the Miami-based NHC said.

Forecasters said it could drop up to 15cmof rain in some areas but that it was not expected to produce significant storm surge in the northwestern Bahamas, which were hammered earlier this month by Hurricane Dorian.

Humberto could, however, hamper relief efforts in the area where thousands of structures were flattened and 70,000 people were left needing shelter, food and water and medical aid.

Dorian slammed into the Bahamas on 1 September as a Category 5 storm, one of the strongest Atlantic hurricanes ever to hit land, packing top sustained winds of 298km/h. 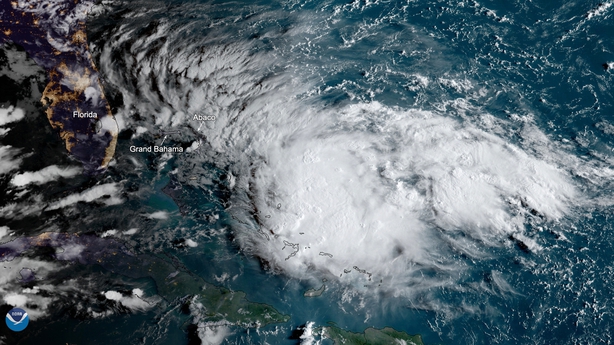 Carl Smith, a spokesman for the Bahamian National Emergency Management Agency (NEMA), warned the storm could have an impact on relief and recovery efforts on the islands.

"The weather system will slow down logistics," Mr Smith told a press conference in Nassau, the capital. "Fuel and water remain the biggest needs in Abaco."

UN Secretary General Antonio Guterres warned of the dangers of climate change during a visit to the hurricane-battered archipelago.

Mr Guterres said in a tweet he had come to the Bahamas "to express my solidarity with the Bahamian people" and "ways we can continue supporting them."

He said 75% of all buildings had been destroyed in some areas by Dorian, a Category 5 storm.

"Hospitals are either in ruins, or overwhelmed," Mr Guterres said. "Schools have been turned into rubble. Thousands of people will continue to need help with food, water and shelter."

He said the hurricane demonstrated the need to address climate change.

"In our new era of climate crisis, hurricanes and storms are turbo-charged," Mr Guterres said. "They happen with greater intensity and frequency - a direct result of warmer oceans.

"Science is telling us: this is just the start. Without urgent action, climate disruption is only going to get worse. Every week brings news of climate-related devastation."