Israel bombed Hamas positions in Gaza overnight in retaliation for rocket fire across the border, which cut short an election rally by Prime Minister Benjamin Netanyahu.

Mr Netanyahu was hustled off stage when sirens warning of incoming rockets blared in the southern city of Ashdod last night.

It came just hours after Mr Netanyahu pledged to annex the Jordan Valley in the occupied West Bank if re-elected.

Israeli fighter jets "hit 15 terrorist targets in the north and centre of …Gaza," including a weapons factory, an attack tunnel and naval targets, the army said.

It said it would "continue to hold Hamas responsible for everything that comes from … Gaza," regardless of who actually fired the weapons.

Hamas has been the de facto ruler of Gaza since they ousted forces loyal to president Mahmoud Abbas in deadly fighting in 2007.

Both rockets fired from Gaza were shot down by Israel's Iron Dome air defence system. 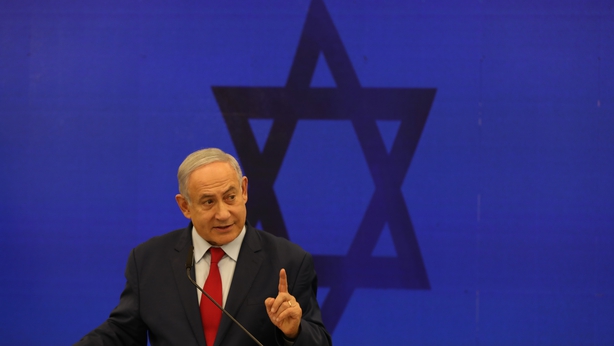 Video posted on WhatsApp by Mr Netanyahu's right-wing Likud party showed him returning to the stage after the all-clear and saying that Hamas was scared of him winning next Tuesday's  general election.

"If it attacks us on live TV, you understand that it doesn't want us here," he told his audience.

Hamas and Israel have fought three wars since 2008.