Robert Mugabe, former prime minister and president of Zimbabwe whose rule was mired in accusations of human rights abuses and corruption, has died in Singapore aged 95.

His 40-year leadership of the former British colony was marked with bloodshed, persecution of political opponents and vote-rigging on a large scale.

He was jailed for anti-government comments between 1964 and 1974.

He became prime minister in 1980 of the new Republic of Zimbabwe and assumed the role of president seven years later.

In 2000 he led a campaign to evict white farmers from their land, which was given to black Zimbabweans, and led to famine.

Mr Mugabe retained a strong grip on power, through controversial elections, until he was forced to resign in November 2017, at age 93.

Current Zimbabwean President Emerson Mnangagwa wrote on twitter: "It is with the utmost sadness that I announce the passing on of Zimbabwe's founding father and former President, Cde Robert Mugabe.

"Cde Mugabe was an icon of liberation, a pan-Africanist who dedicated his life to the emancipation and empowerment of his people. His contribution to the history of our nation and continent will never be forgotten.

"May his soul rest in eternal peace."

It is with the utmost sadness that I announce the passing on of Zimbabwe's founding father and former President, Cde Robert Mugabe (1/2)

He denounced his removal as an"unconstitutional and humiliating" act of betrayal by his party and people.

Last November, Mr Mnangagwa said the former president was no longer able to walk when he had been admitted to a hospital in Singapore, without saying what treatment Mr Mugabe had been undergoing.

Officials often said he was being treated for a cataract, denying frequent private media reports that he had prostate cancer.

The South African Government said on its official Twitter account: "We send condolences to the government and the people of the Zimbabwe following the passing on of their founding leader and former President Robert Mugabe.

"The fearless pan-Africanist liberation fighter died in a hospital in Singapore. He was 95."

The US embassy in Harare, Zimbabwe's capital, extended its condolences to the Mugabe family.

The United States extends its condolences to the Mugabe family and the people of Zimbabwe as they mourn the passing of former President Robert Mugabe. We join the world in reflecting on his legacy in securing Zimbabwe's independence.

China, which was one of the staunchest supporters of Robert Mugabe, said he was an "outstanding national liberation movement leader and politician".

"Throughout his life, he has firmly defended the sovereignty of his country, opposed foreign interference, and actively promoted China-Zimbabwe and China-Africa friendship and cooperation," said Mr Geng.

Nelson Chamisa, leader of Zimbabwe's opposition Movement for Democratic Change (MDC) party, tweeted: "My condolences to the Mugabe family and Africa for the passing on of Zimbabwe's founding President. This is a dark moment for the family because a giant among them has fallen. May the Lord comfort them.

"Even though I and our party, the MDC, and the Zimbabwean people had great political differences with the late former President during his tenure in office, and disagreed for decades, we recognise his contribution made during his lifetime as a nation's founding President.

"There's so much to say for a life of 95 years and national leadership spanning over 37 years but in the true spirit of Ubuntu, we would like to give this moment to mourning but there will be time for greater reflection."

South Africa's President Cyril Ramaphosa remembered Mr Mugabe as a "champion of Africa's cause against colonialism".

"Under President Mugabe's leadership, Zimbabwe's sustained and valiant struggle against colonialism inspired our own struggle against apartheid and built in us the hope that one day South Africa too would be free," Mr Ramaphosa said in a statement.

Prominent Zimbabwean activist Evan Mawarire tweeted: "In 2016 Mugabe threatened to have me killed - my response - 'There are many things you have the power to do to us Mr President, but there are 2 things you have no power to stop. You cannot stop your sun from setting & you cannot stop mine from rising'.
"Your sun has set Robert. Goodbye."

Mr Mawawire, a pastor, organised national protests against Mr Mugabe's presidency under the name #ThisFlag, referencing a viral social media post in which he vented his frustrations against the regime.

He later faced trial for an alleged attempt to overthrow Mr Mugabe's government but was acquitted in 2017.

Mr Mugabe - the former political prisoner turned rebel leader - swept to power in the 1980 elections after a growing insurgency and economic sanctions forced the Rhodesian government to the negotiating table.

In office, Mr Mugabe initially won international plaudits for his declared policy of racial reconciliation and for extending improved education and health services to the black majority.

But that faded as rapidly as he cracked down on opponents, including a campaign known as Gukurahundi that killed an estimated 20,000 dissidents.

The violent seizure of white-owned farms turned Mugabe into an international pariah - though his status as a liberation hero still resonates strongly in most of Africa. 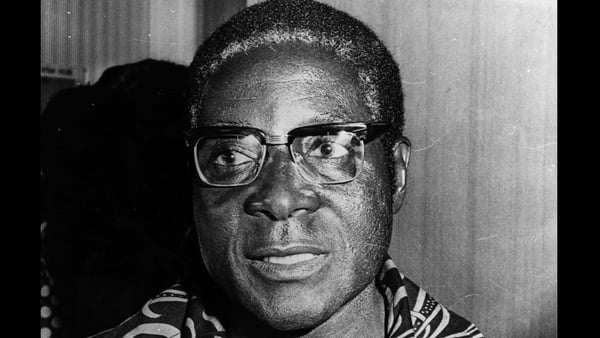 'I have died many times. That's where I have beaten Christ' - Mugabe in his own words