A 99-year-old man from Waterford competing at the World Tango Championships in Argentina has received an ovation for his performance from aficionados at the Buenos Aires venue.

"Tango brings me a lot of happiness," Jim McManus told local newspapers through an interpreter. "Dancing is very important socially."

Tango fans in Ireland had raised money for his transatlantic trip through a GoFundMe page.

The fit nonagenarian said he only took up tango in 2002, when he was already in his 80s, and dances every Tuesday night as part of the Waterford Tango group.

Dressed in a white jacket, black trousers and tie, he danced in the first qualifying round with an Argentine partner, Lucia Seva.

The couple won the biggest round of applause from the knowledgeable audience at the Argentine capital's Usina del Arte venue.

The 2019 edition of the world championships features 744 couples from 36 countries. 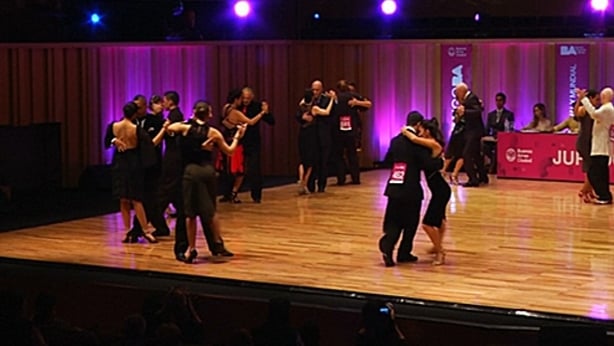 Jim, who is originally from Scotland and served in World War II, put his long life down to a healthy lifestyle, with good food and exercise.

In an interview with WLR in 2018, he said: "It's no secret … eating the right sort of things, not eating the things which you shouldn’t eat and avoiding certain things, like too much booze and fags.

"Dancing is good exercise for the whole body, the brain, the arms, the legs, heart and everything."

Speaking from Buenos Aires, Jim, who was representing Ireland in the competition, said he was very honoured just to take part.

He said he thought he would have a go at the competition to see how far he could get.

Jim said he was happy that he even got through it and added that tango is the best form of dance throughout the world.

Jim said he might return to Argentina to take part in next year's competition.