A Dutch company is leading the way in the cleanup of plastic along Amsterdam's canals.

Plastic Whale is a company that provides boat trips down Amsterdam’s canals for tourists to remove plastic from the water while taking in Amsterdam's sites.

With eco-tourism booming around the world, the canal cruises run by the Dutch group Plastic Whale are reeling in big business.

"Obviously you're on the beautiful canals of Amsterdam in a really nice boat, but at the same time you're active as well, and you add something positive to the canals and to the city because you're making it cleaner."

Mr Smit set up the company eight years ago, aiming to create "economic value" from the plastic waste the tours dredge from the canals.

Plastic bottles are separated from the rest of the rubbish and are then recycled to be used in office furniture - or in building more Plastic Whale boats.

In 2018, the Plastic Whale cruises, which also run in the port city of Rotterdam, drew 12,000 visitors and this year they expect more, said Mr Smit.

Britain's Prince Harry was due to be among the visitors earlier this year but had to cancel due to the birth of his son Archie. 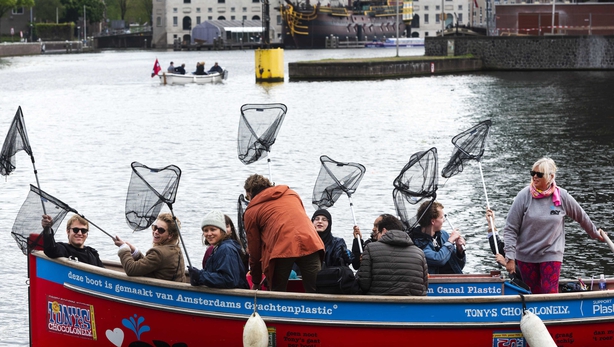 On a hot summer's morning, seven people are lined up on the bright green boat decorated with smiling whales.

Angela Katz, an Australian who has lived in Amsterdam for just over a year, is on her second tour, after learning about the cruises through Facebook.

"I really enjoyed it but also it's really eye-opening just how much rubbish there is in the canals," said the 51-year-old graphic designer, fishing rod in hand.

During the two-hour tour they fish out a bizarre range of objects including various shoes, ski gloves, bleached out soda cans, wine bottles, a nappy, and even a whole pineapple.

"I think the Netherlands has an image of being very environmentally friendly so it is surprising," added Ms Katz, who brought her husband on the cruise as well as two friends and their three children who were visiting Amsterdam.

One of those friends, Guy O'Loughnane, from Vancouver in Canada, said he was particularly surprised by the amount of "stuff that is not even used", such as unopened bottles.

"And for every bag of bottles that we take out of the canals, we take out two or three bags of other kinds of materials," he added. 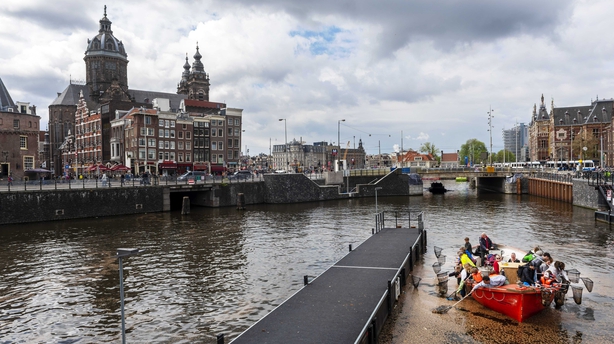 Plastic in the sea, rivers and other waterways is a problem around the globe, causing harm to marine ecosystems.

Just how much plastic is in the canals of the city dubbed the Venice of the North is hard to estimate, but solutions are easier to find.

"Tourists aren't careful," said Angela Katz as she stands in front of a pile of rubbish.

Mr Smit said however that despite the growing strain on Amsterdam from huge numbers of tourists, local residents are also "careless with their own waste".

"It's a combination of factors," he said, explaining that the city's bins fill up more quickly because of the numbers of tourists, and then people simply place their rubbish beneath them.

"So before you know it there is a lot of waste on the streets, then it begins to rain or the wind begins to blow and it rains or blows into the canals," he said.

Amsterdam is increasingly a victim of its own success, with its canals, architecture and notorious red light district attracting around 18 million visitors last year, more than the entire population of the Netherlands.

The Plastic Whale tours are part of a growing trend, with Amsterdam authorities separately launching a series of initiatives to direct tourists to alternative activities and ease the pressure on the top sites.

Mr Smit however says that tourists are outnumbered by the Dutch on the cruises.

"Interest in the environment is growing explosively within Dutch society in general," he said.