Israeli forces demolished a cluster of Palestinian homes near a military barrier on the outskirts of Jerusalem, in the face of protests and international criticism.

Israel said the ten apartment buildings, most of them still under construction, had been built illegally and posed a security risk to Israeli armed forces operating along the barrier that runs through the occupied West Bank.

UN officials, who had called on Israel to halt the demolition plans, said 17 Palestinians faced displacement.

Bulldozers accompanied by hundreds of Israeli police and soldiers moved into Sur Baher, a Palestinian village on the edge of East Jerusalem in an area that Israel captured and occupied, along with the West Bank, in the 1967 Middle East War.

Palestinians fear that the razing of buildings near what Israel describes as a security barrier against Palestinian attacks will set a precedent for other towns along its route, which snakes through the West Bank for hundreds of kilometers.

The demolition is part of the latest round of protracted wrangling over the future of Jerusalem, home to more than 500,000 Israelis and 300,000 Palestinians.

Israeli forces cut through a wire section of the barrier in Sur Baher under cover of darkness early today and began clearing residents, before bulldozers and mechanical tore down homes.

Palestinian owners said their buildings lay within areas run by the Palestinian Authority (PA), which exercises limited self-rule in the West Bank under the Oslo interim peace deals with Israel.

"I built this house stone by stone. It was my dream to live in this house. Now I am losing everything," said Tareqal-Wahash, 37, his voice breaking as a bulldozer destroyed his unfinished three-floor home.

"I had a permit to build from the Palestinian Authority. I thought I was doing the right thing," he said. 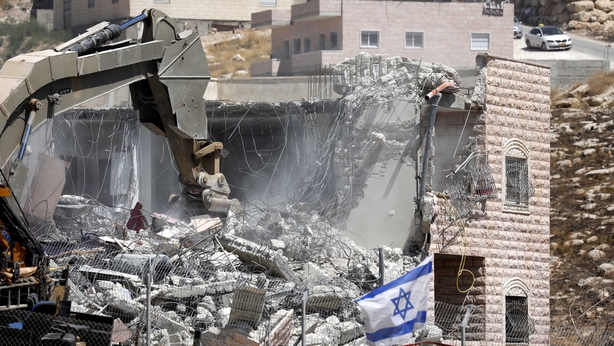 The deadline for residents to remove the affected buildings, or parts of them, was Friday.

In a statement, the European Union said the structures, containing some 70 apartments, were in areas under PA jurisdiction and that Israel's demolition policy in occupied territory is illegal under international law.

"In line with the EU's long-standing position, we expect the Israeli authorities to immediately halt the ongoing demolitions," it said.

Gilad Erdan, Israel's internal security minister, accused the EU of buying into "the lies of the Palestinians".

He tweeted that, under the Oslo accords, Israel has the right to act against illegal construction that presents a security threat.

"This is a continuation of the forced displacement of the people of Jerusalem from their homes and lands -- a war crime and a crime against humanity," Mr Shtayyeh said.

Parts of Sur Baher lie inside the municipal boundary of Israeli-occupied East Jerusalem and parts outside the barrier, in the West Bank.

But some lies in between: just outside the Jerusalem line but still on the Israeli side of the barrier.

The Palestine Liberation Organisation issued a statement accusing the Israeli court of trying to set a precedent for further demolitions along the barrier.

Israel credits the obstacle, projected to be 720km long when complete, with stemming Palestinian suicide bombings and shooting attacks.

Palestinians call it a land grab designed to annex parts of the West Bank, including Israeli settlements.